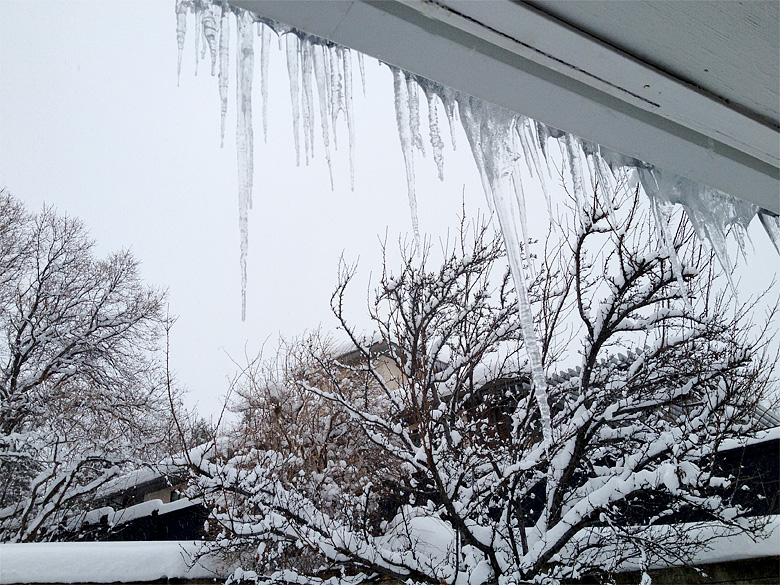 During last year’s mild winter when I overheard people lamenting the lack of snow I had a really hard time not butting into the conversation with a can of Mace. Because the Universe? It is always listening. And it’s like, oh? Really? You want snow? YOU JUST WAIT. Because this winter I’m going to pin you down and shove snow down your maw so hard you that are going to poop ice through Labor Day.

The Universe was so not kidding. In fact, the Universe is Tony Soprano.

It will not stop snowing. It just goes on and on and on, and although we are normally prepared for this kind of weather the city just can’t keep on top of it. So every time I leave the house I make sure my prepared-by-Mormons 72-hour kit is in the back of the car because the snow could swallow the vehicle at any time. However, I think I could quite possibly survive a day or two on all the gum that’s been dropped between the driver’s seat and the middle console, the gum that always slips out of my hand before I can get it from the container to my mouth. And that’s why I don’t ever clean that shit up: apocalypse preparedness.

There’s a merit badge for that skill in the Boy Scouts.

Last Thursday we woke up to the city’s first ice storm in 30 years. Okay, first of all. FIRST OF ALL. The story on the news started with something like, “We haven’t seen ice like this since 1983!” And my first thought was, “Oh! OH! That’s when I had that poster of Michael Jackson in a yellow sweater hanging on my wall! DING DING DING.” But then the idiot news anchor who has no respect for humanity had to be all, “THIRTY YEARS!” and I was like, OH MY GOD 1983 WAS THIRTY YEARS AGO HOLY BOTOX BOOB JOB.

No no no no no no. How can this be? It’s fine to READ about the inevitable march toward death in classical literature. It’s a whole other thing TO LIVE IT.

SECOND. Yes. I’m not digressing. Not today. There is no digressing in apocalypse preparedness. SECOND. I didn’t see this news story until later in the day. I did not see it before I left the house with both girls in the car, before I pulled out of the garage and thought, hm. It’s raining. The temperature finally warmed up enough that it’s raining. That’s the thought I still had at the top of the hill leading down to the first intersection in the neighborhood when suddenly the car started sliding. And gaining speed. And not responding in any way whatsoever to the brakes. And Leta was in the backseat going, “Well, THIS is strange.”

“Strange.” I’m glad that was the word she thought of. Because mine was “gefiltefuck.”

I’m just going to take this opportunity to thank the Universe for noticing all those times I let a car merge into traffic in front of me (it is always listening, remember?) because no cars were crossing that intersection as we slid through it at about 20 mph and turned in a full 360 degree circle. I didn’t want to alarm the girls, so instead of screaming I did my best, “WHEEEEE!” except it was so forced that I sounded like I was trying to cheer for a root canal to win.

I don’t know how I got both kids to school without killing all of us and 400 other people in six different states, but I did it. I got them there. But by the time I returned home so much ice had fallen that I couldn’t get the car back up the hill to my house. In fact, two cars were stuck in the middle of my street blocking access anyway. So I had to park another 50 yards down that street and then attempt to hike up my street on foot. Key word here: ATTEMPT.

Have you ever hiked on a sloping iceskating rink? Yeah, you die. Unless you’ve got gum.

You live in Florida and are envious? The whole endeavor looks a lot like this.

It took me over 45 minutes to walk from my car up the hill to my house, and as I was inching inching inching inching inching, being as careful as I could to remain upright and not suffer a concussion, pretty much doing a spot on interpretation of a robot with hiccups, the woman stranded in one of the stuck cars rolled down her window and shook her head at me.

“WHERE are you GOING?!” she hissed.

Was she serious? Had she slipped and hit her head?

Oh, you know. I thought I’d go for a jog! Sure picked a crappy day for that, though. So I think I’m going to stand here on this sloping block of ice and knit some socks. Maybe wander around and hang them on everyone’s mailbox. Blow people’s minds. I’m a fucking ice fairy.

I pointed at my house in the distance and told her I was trying to go home. And she just sat there with her window rolled down shaking her head at me like I was the saddest little ice navigator she had ever seen. And I wanted to go, you know what? I’VE GOT A CAR FULL OF GUM. Come see me when the world ends. Oh right, you’ll be dead.