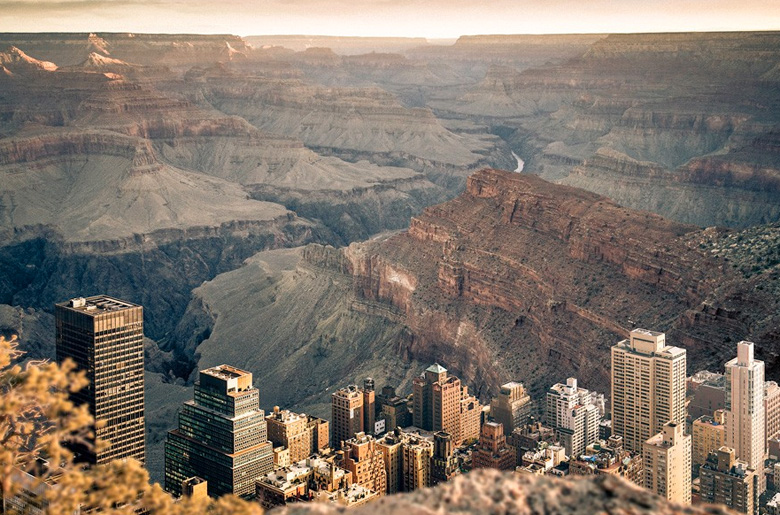 – Photographer Gus Petro – “‘Merge’ is the last part of a project series ‘Empty, Dense, Merge’ which explores two opposite feelings through the photos of places located in USA.”

– “Paid for by New Yorkers who think Texas blows”

– I know what I’ll be doing this weekend: Where Do I Start With This American Life?

– Who by very slow decay:

Every day, your doctors will meet with your family another time, and eventually, as your condition worsens and your family has more time to be hit on the head with a big club marked ‘REALITY’, they will start to relent. Finally, they will allow your doctors to take you off of the machines, and you will be transferred to Palliative Care, whose job I do not envy even though every single palliative care doctor I have ever met is relentlessly cheerful and upbeat and this is a total mystery to me.

– Blinkbox is celebrating their release of the Game of Thrones third season by placing a dragon skull “the size of a carriage” on a beach in England.

– A visual love letter to the fog of the San Francisco Bay Area.

– Even world famous rappers have problems.

– What your yacht says about you

– “… should you come across a curious bear.”

– PUPPY CAM! These golden retrievers and labs are going to grow up to be service dogs. Wheee!

– Marlo’s personality in an animated GIF

– One woman’s struggle to reuse her penis cake mould

This is, of course, the usual go-to plan from almost any crisis PR pro’s playbook: Say nothing, or risk being damned no matter what you do.

– For the men in the room: How Clothes Should Fit

– Currently obsessed with Pitchfork’s debut of this website dedicated to film: The Dissolve

One time I talked to my mom and she didn't accidentally call me by my sister's name and I've been chasing that high ever since.

Typos annoy me just as much as the next gay.

Is it called NASCAR because that's the way a hillbilly pronounces "nice car?"

If you want out of a conversation, start combing your hair with a hunting knife. I bet they'll leave you alone.

I eat a banana with a spoon because I’m not a whore.

You don't even want to know what happens when you feed a Mogwai gluten.

I just told someone that I have to pee pee. It's hard toggling back and forth between being a parent and being a dude.

Survival tip: If you are wearing one of those padded neck braces, try and put that shit on a deer somehow

Hey people with no kids, thanks for saying "oh, what's wrong sweetie?" to my asshole toddler when I'm ignoring their public tantrum.