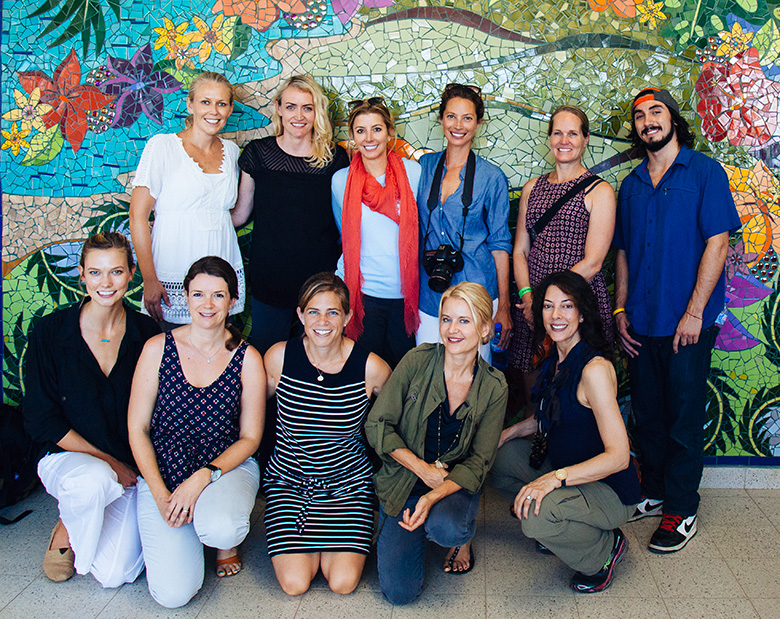 Upon returning from Haiti a few weeks ago I called my 73-year-old father to fill him in on all the details of the trip, the honor I had to learn from people who are running and working for organizations in that country dedicated to improving various means of healthcare and making it more accessible to a population with such limited resources. He asked about the group of women who had assembled for this trip, and I spoke of the privilege I had to meet and bond with such an incredible group of entrepreneurs, a gathering of spectacular minds and success stories most people will only ever get to read about. He stopped me mid-sentence to say, “Wait. You would think that with all the traveling you do and the amazing people you meet that you would come across a male entrepreneur, or maybe a rich doctor or a rich lawyer, some powerful man who could take care of you for the rest of your life.”

Ahem. You guys, I get the feeling that my dad hasn’t ever heard Beyoncé sing, “WHO ARE WE? WHAT WE RUN? THE WORLD.” One night while he’s sleeping I’m going to pay to have someone tattoo those lyrics around each of his nipples.

(When you read this, Dad, please remember that I got my sense of humor from you. And as you shake your head and think, “Her generation is so messed up,” just be glad that you don’t know the half of it.)

During the four-hour van rides between hospital visits and meetings all the women engaged in the age-old act of storytelling, each of us taking turns to describe birth stories, time spent building products and the hard work it required to bring them to life, nightmarish preschools, in-laws, sick kids, FIFTH GRADE MATH HOMEWORK, and personal hygiene. Did you guys know about vaginal reconstruction? This is an actual thing. A thing that is happening. Women are paying to have their vaginas surgically altered to resemble a more beautiful vagina. I’m guessing that there is a benchmark here that I was unaware of. I just cannot imagine a man in the throes of sexual intercourse stopping to go, “You know, I was in the mood, but your vagina is ugly.”

Over dinner one night the entire group was mesmerized by an account from someone who started dating a guy she met through Tinder only to turn on the television one night and see that he was the target of a national manhunt. When we asked if she was still using the app she responded without hesitation, “Of course!”

I know of two other people who have met convicted felons through Tinder, but come on. This is only three instances. This is a tiny sampling. I bet the majority of men on there are perfectly upstanding and do not care if your vagina resembles the opening to the sleeve of a wizard’s cloak.

Storytelling was at the heart of our time together, as it is at the heart of so many rich female relationships. Our group left Haiti in three different shifts, and when I got home I realized I needed share an experience I had while leaving the country with those who had not been with us to the very end.

I was part of a group of six who left on a Tuesday afternoon via an American Airlines flight to JFK in New York. After boarding the plane with four crates of Rhum Barbancourt I’d bought at Duty Free—what? is that excessive? how else is my dad going to sleep through all that tattooing?—I slipped off my shoes and immediately closed my eyes for a nap, one so quickly intense that I began twitching and drooling down my chin onto my shirt. Karlie Kloss, time to step aside. Your competition was sleeping in seat 17D.

I was in and out of that nap for over half an hour, far after our plane was supposed to depart, when I heard the flight attendant loudly complaining to a passenger nearby. Her New York accent woke me as New York accents are wont to do. Listen, I’m not saying anything derogatory about New York accents. I happen to love the sound of a set of forks, two pots, a cow bell, and one giant tabby cat being thrown into a dryer that’s set on high.

“If he would just get on the plane with everyone else I wouldn’t have to do all this rearranging!” she told a passenger. “If he doesn’t want me to check his bag then stop being late, am I right?!”

I then looked around the plane and noticed that a large number of seats were empty, odd given that those flights are usually packed. As I turned back to face the front of the cabin several men in dark suits and sunglasses boarded the plane and took seats here and there. As I was wiping the yarn-shaped dribble of spit that was puddling on the top of my boob, a tall and imposing figure dressed in a sophisticated suit walked onto the plane and into the aisle. I sensed everyone in our group exchanging fierce glances at each other, and with a wad of drool in my hand and my bare feet peeking out from underneath the seat in front of me, I made direct eye contact with… wait for it… The President of Haiti.

The. President. Of. Haiti.

WHO THEN SAT DOWN IN THE ROW DIRECTLY IN FRONT OF ME YES THIS DESERVES TO BE WRITTEN IN ALL CAPITAL LETTERS I MEAN COME ON SERIOUSLY.

I was sitting in the aisle seat next to Erin Thornton when he, The President of Haiti Michel Martelly, took the seat in front of hers. When he turned his body to buckle his seatbelt he saw me gaping at him between the space between the seats.

“Hello! How are you today?” he, The President of Haiti, asked me.

I turned to my left and then to my right, and then did that again and again to figure out who he was talking to when I realized that he, The President of Haiti, was talking to me, The Mommyblogger.

I may have grunted? Groaned? Picked my knuckles off the floor and begun composing a blog post in my head?

“HI I AM REALLY GOOD HOW ARE YOU?” managed to come out of my mouth, all monotone because I am a baller when it comes to hanging with dignitaries.

During the flight Erin leaned over to me and whispered, “Do you think we should say something to him? I mean, this is a really unique opportunity.” And I was like, listen. My mother, a woman who started selling Avon to friends and eventually worked her way up to becoming the Regional Manager of the entire Western United States would say that the Lord had sent The President of Haiti to be on this specific plane at this specific time. This is the work of the Holy Ghost. Sure, the Holy Ghost could be working on the whole Ebola thing, whatever, but the dude is omnipresent. My mom would say that you’re disregarding the work of God.

“I would reeeaaaally hate to disappoint your mom,” Erin said. NO ONE HAS LIVED TO TELL ABOUT DOING SO, ERIN.

Once the plane landed and started taxying toward our gate, Erin leaned forward and delicately tapped the back of his seat.

“Mr President? Mr. President?” she asked with all the respect that he was due. I will admit, however, that the Mommyblogger in me kinda wished she had put on some red lipstick, taken black eyeliner to paint a fake mole on her left cheek, and serenaded him with a sultry, “Happy birthday to yooouuuuuu!” Would have gone viral, that video.

He, The President of Haiti, turned to face her and listened as she expounded on the work that EMC has been doing in his country, and then he graciously and seriously offered to meet up on EMC’s next visit to the country. She gave him her card and he had his Chief of Staff? Chief Organizer? I’m not sure who it was, but he had some Very Important Guy give her his card so that they could coordinate. Every Mother Counts connected directly with The President of Haiti. It was an incredible moment, albeit one preceded by my drool boob.

Hey, Dad! DID YOU READ THIS? I actually DID meet a powerful man! And it didn’t even happen through Tinder!