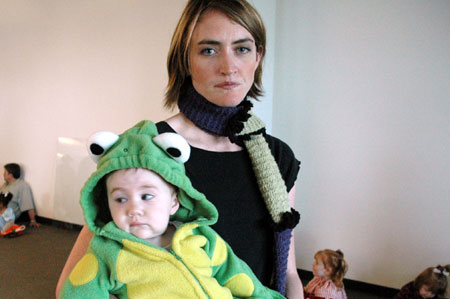 Yes, those nasty rumors are true. Mormons celebrated Halloween on Saturday night when it wasn’t even Halloween. You see, it’s against the commandments to trick-or-treat on Sunday, as that would violate the commandment that says, “Thou shalt not celebrate the demonic holiday of Halloween on the Sabbath. But on any other day it’s okay.”

One precocious eight-year-old girl who was dressed as a large turtle came to our door and said, “Trick-or-treat. Happy Halloween TOMORROW.” And then she rolled her eyes as if she were being forced against her will to conform with all these morons. God made it snow all day yesterday to punish anyone who didn’t trick-or-treat the night before. He so wasn’t kidding.

Our weekend started off with a BANG at Jon’s work Halloween Party where we were witness to the part of Utah’s population that refuses to practice birth control. There were more than three or four families there with eight or more children. That’s the number that comes after seven, which is really six more than is allowed in some parts of the world. One family dressed their nine children as barn animals. I didn’t know there were that many barn animals in the world, BUT THERE ARE. I sat for most of the party in Jon’s cubicle with the little Leta Frog and let her play with the millions of things on his desk that she hasn’t yet seen. She was entertained for a whole 12 minutes.

Here is a picture of me and Leta walking around looking at all the different costumes. Could I look a little less amused? Smile, bitch! (I am wearing the lovely knitted scarf sent to me from Allison)

And I just went as Someone Who Wanted to Get Really Drunk. We stuck with gin all night, and I wasn’t making that big a fool of myself WHICH IS SAYING A LOT. I have a hard time not making a fool of myself at the parties at Roger’s house, because they always have this table there with what seems like thousands of liquor bottles, and you’re just allowed to pour your own drink and HOW CAN YOU POSSIBLY NOT GET INTO TROUBLE WITH THAT AROUND? I know that all of you went to college parties where there were liquor tables, but I went to college in God’s lap. Parties with liquor tables are a relatively new thing in my life, so in Liquor Years I’m really only about 12 years old.

On Saturday, Mormon Halloween, we drove up to Grandma’s house and hung out with some cousins:

Okay, one more picture of Leta Frog and then I’ll stop banging your ovaries with the cute hammer:

Saturday night we invited George up for dinner. Everybody say it with me now: GEORGE!

Halfway through dinner Beth, Dave and her kids showed up and all fucking chaos broke lose. There were kids in costumes running about the house which was awesome because we were trying to keep Leta awake an extra hour. STUPID STUPID STUPID first time parents! She went to bed an hour later than usual and was the in the nastiest mood the next day when she woke up at what she thought was the right hour but was in no way the right hour.

And here is Dave eating a piece of our pizza in Classic Dave Style where half of it ends up on his face and HE DOESN’T KNOW:

At one point in the night I handed George the camera and told him to play around with it. I just now looked at all the pictures he took, and JESUS! GEORGE! Are you blind? What is this:

Pictures need a focal point, dude. WHERE IS THE FOCAL POINT IN THAT SHOT? Chuck’s ass? And then of course he ran outside and did what any reasonable man would do with a camera in his hand and he took a picture of his car:

He did, however, capture the essence of our TWO FOOT WIDE PIZZA:

Who the hell needs that much pizza? Maybe a family with nine kids dressed as barn animals, maybe. But I swear to God we’re going to be eating pizza until the second coming of Jesus Christ. (And for those of you wondering, yes, Chuck did get his own piece.)

At one point in the night Beth’s youngest son, Eli, crapped his pants and I convinced her it would be okay to change his diaper in the house. She had taken him outside on the porch and was going to change him out there on the CONCRETE. What kind of friend would I have been if I had let her do that? NO FRIEND AT ALL. So she brought him inside, and I thought I could handle it, but did you know that a two-year-old’s poop is very, very different than a nine-month-old’s poop? I didn’t know this, and I’m considering legal action against Beth for not divulging that information.

Here is Eli leaving the scene of the crime, in his galoshes:

And of course, I’ve saved the best for last, the annual humiliation of my dog wherein I take pictures of him in costume and superimpose them against stock photography: