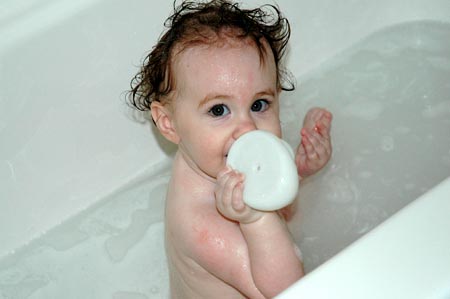 Today you turn eleven-months-old. Coincidentally, that’s almost three times as long as most of my relationships during college and afterward lasted. You’ve got longevity!

Right now you’re in your crib for your morning nap and I am sitting in the living room listening through the monitor to you talking to yourself. Before you fall asleep you also like to pat your right hand against the mattress and kick your left foot up and down. If these habits are any indication, we’ve given birth to the female Stewart Copeland, and if that is the case I can’t wait for you to go on tour and pay for our retirement. We could live with your on your tour bus and drink a couple beers after each show. WHO SAYS YOUR MAMA CAN’T HANG?

This month you’ve learned how to turn in circles while sitting on the floor. I find it somewhat frightening to return to you after running to the bathroom only to find you 180 degrees from the position I left you in. This means I have to be THAT MUCH MORE vigilant about the things within reach of your wingspan. Yesterday I found you flipping through the pages of The Metrosexual Guide to Style which you had somehow snatched off the coffee table (your father won that book as a prize for being the Best Dressed Bowler at a company bowling party). Just as you were about to shove a page into your mouth I rescued the book and moved it far from your rotational reach. Don’t you know? METROSEXUALS DON’T EAT BOOKS. Consider that lesson number one.

For the past two weeks your two top teeth have been trying to make their way into the world. Leta, those two teeth are HUGE. I didn’t know babies could have such gigantic teeth. They are a big as walrus tusks, and I’ve considered pulling them and crafting some ivory jewelry. You can bite through cardboard boxes and rip holes in stuffed animals. Yesterday I gave you a sealed box of Dulcolax to entertain you for just a few seconds while I wiped down the kitchen counters. Within two seconds you had gnawed through the box and were on the verge of puncturing an actual tablet wrapped in plastic coating. I had to shove my fingers into your mouth to dig out portions of the box, and then I picked you up, set you on my hip and called the police. “Please arrest me,” I begged them.

Your first Christmas was a week ago, and your father and I decided that Santa Claus should only bring you three gifts because that’s all Jesus got. Santa brought you colored blocks, some sort of pop-up toy, and the orange Boohbah. You were far more interested in the wrapping paper than the toys — well, except for that moment you almost started humping Zing Zing Zingbah. We spent a few days with Grandma and Grandmommie who both gave you clothes and toys which you immediately turned over to find the tags. It’s like you’ve got Tag Radar, and no matter how cute or snugly the toy, if it doesn’t have a tag IT’S USELESS.

Here’s a photo of you with Uncle Tom:

Although you probably have no idea what you’re saying you have a habit of repeating “Go” on command. Sometimes you even say, “Go, dog, go,” and seriously, IT IS THE CUTEST THING OH MY GOD. “Go, go, go, go, go,” you’ll say, and then you’ll smile and clap your hands with pride as if you have just recited the Gettysburg Address. You love to play peekaboo and will continue to play it loooooong after I have become bored and what to play something else, but even after the hundredth time you pull down the frog blanket to reveal your face you giggle just as heartily as if it were the first time. You also giggle if I walk into the room and fart which is good because, Leta, in this family bodily functions are THE NORM. You will grow up surrounded by farts.

This month you have also developed a great love for your rubber ducky, for sticking your tongue out, for reaching out to grab my tongue, for acting shy when your father walks in the door from work, for smiling at strangers in the grocery store, for opening your mouth like a baby bird when we feed you small bites of our cinnamon rolls, for blabbing incessantly while being fed applesauce, for sucking your thumb while riding in the car.

This month I have memorized the curve of your smile, the dimples in your cheeks and forehead, the point at which the curls at the back of your head meet your neck. Last week a terrible tragedy took the lives of thousands and thousands of innocent people on the other side of the world, the lives of mothers, fathers, brothers, sisters, sons, and daughters. I still haven’t wrapped my head around what happened and the suffering that so many people are going through, but I do know that it has made me feel overwhelmed with my love for you. I cannot imagine ever losing you. I would search the world over for you. I would hold you to my chest until my hands bled. I am so thankful to have you here, to have your giggles echo through the house, the noise of your life in my ears, my beautiful daughter, my little LeeLee.