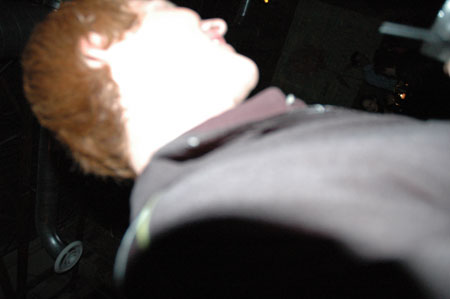 It’s that time of year again in Utah, time for the Sundance Film Festival and for all your friends who got the hell outta here to return to the Holy Land and party with you again. Tis this number one excuse to return to Utah, I tell you, right behind snowboarding and all the great virginal pussy to be had in Utah County. Yes, mother, I did just say that out loud.

Jon and I won’t be seeing any of the films this year — oh, no. This season’s “Apprentice,” and “The Bachelorette” just started, and there’s at least a few more “Project Runways” in the queue. Why would we leave our warm home where there is an abundance of bourbon to drive 30 minutes into the COLD MOUNTAINS where you can only buy one ounce of alcohol AT A TIME? Do you know how long it takes to get buzzed in Utah? About as long as it takes for a Mormon man to get laid after the first year of his marriage. Yep, that one was out loud, too, Grandmommie.

Friday night we had dinner with 10 of our good friends half of whom were in town for the festival or for the snow. We picked the most reputable sushi joint in town — Utah is landlocked, you know, so animals that live in water have no business being here — and booked a table for a tempanyaki style meal, the kind where the chef cooks right there in front of you. I got to sit right next to my friend, Sydney, the one from South Carolina, the one getting married in June, the one whom I promised I would get drunk on champagne and sing, “You Light Up My Life,” at her reception. She’ll be getting all sorts of fine china and dinnerware from other people, sure sure, but from Jon and me, she’ll be getting a drunken, Southern, bona-fide Boone rendition of her favorite childhood song SUNG ENTIRELY FROM MEMORY. Tell me you wouldn’t want THAT at your reception to be attended by all your closest, uptight relatives.

Dinner was delicious, but I barely remember any of it for having to try to listen to 10 different people holding five separate conversations at one time. It was the After-Dinner Festivities that were note-worthy, if only because SOME BOY TRIED TO PICK ME UP. Now, I know that women get picked up at bars all the time, I used to be one of them, and I used to do a lot of the picking up myself, but I was standing DIRECTLY next to my husband at the time, AND I was talking to my other friend about poopy diapers. Do I talk about poopy diapers over martinis a lot? OF COURSE I DO.

So I was standing there, poopy-diaper talking, and my wedding band was reflecting light like a castaway who is trying to flag down a plane with a mirror, and this BOY walked up. I have to call him a boy because I swear to God he looked young enough to be my own child. And he pointed to the camera I had hanging around my neck and asked, “Whatcha taking pictures of?” I think this was right after I told my friend that Leta poops lima beans whole.

I honestly had no idea what he was trying to do because no one has tried to pick me up since I started dating Jon almost four years ago. My first thought was, “Oh, poor thing, he wants to be a part of our group.” So I answered his question, “Stuff.” And then my friend gave me this look, this horrifying look, a look that indicated HE IS TRYING TO PICK YOU UP, YOU IDIOT. But I didn’t believe her look because I am married and I change dirty diapers all day long and who in their right mind would want to pick me up when my very tall and very strong husband is standing at my side?

So I looked at Jon who gave me the same look as my friend, and then it hit me, OH MY GOD, THIS BOY IS TRYING TO PICK ME UP, IF HE DOESN’T RUN AWAY NOW JON WILL CUT HIM UP INTO LITTLE PIECES AND SELL THEM ON THE STREET. Right then I gave a look to Jon, a look Chuck used to give to his trainer when he was afraid and not sure if he was supposed to sit or stand or just lose control of his bowels, a look that said, I have no idea how to get out of this one.

But the boy wasn’t paying attention to all the looks going on, and he continued, “Whatcha taking pictures of stuff for?” And Jon gave me this look that said, “Try to get out of this one, and if you don’t succeed I will help you, but I am finding great amusement in this moment.”

I couldn’t figure out why he was continuing to ask me questions, it just made no sense, so I answered, “That’s no one’s business but my own.” That would definitely work, I thought. If the wedding band and the poop diaper talk couldn’t do it, telling him that he couldn’t find my website on Google, well then, THAT should put him in his place.

“No one knows about your website? How come?” He continued, making it obvious that I had lost all the skills I honed as a single woman living in LA. And since Jon is a generous and loving husband, he could see that I wasn’t getting out of this one very well and that my tail was squarely between my legs.

Jon answered him, “Dude, plenty people know about her website.”

AND THEN THE BOY CONTINUED, “Well, come take some pictures of my friends for your website.” Jon and I looked at each other incredulously, and I did what I was always unable to do in my single days, something I had always wanted to do, and don’t look now but the Lord done up and provided an opportunity of a lifetime. I held up my left hand and shouted, “I’M MARRIED.”

He took a look at my wedding ring, acted as if he had no idea what it meant, and CONTINUED, “Well, come take some photos of me and my friends.” I had tried everything short of running away, so I looked at Jon and asked him, “Would you like to take some photos of his friends?”

And oh dear, How Merciful and Kind is He That Daddied My Baby, because he calmly took the camera from around my neck, activated the flash, and began FLASHING THE BLOODY LIVING SHIT out of that boy’s face. In the middle of the flash storm Jon asked the boy, “How are these pictures for you?”

I’d say that Jon’s reaction was considerably tame given the fact that someone was trying to pick up his wife right in front of him, but I am neither as merciful nor kind nor as sociably skilled as he is, and that’s why I’m posting that boy’s picture here. Plus, HE WANTED ME TO:

Thank God my website is nobody’s business but my own.