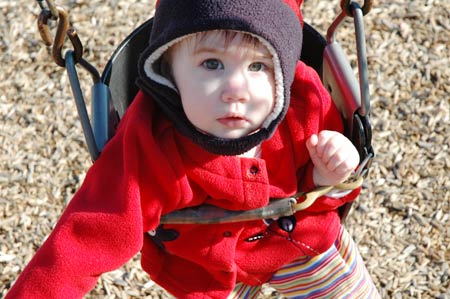 Yesterday morning when Jon left for work Leta threw a fit and started crying uncontrollably. We knew this day was coming, we just didn’t know it would happen so soon, and while it was heartbreaking knowing that she was sad he was leaving, it was just so BEAUTIFUL. She wanted her Daddy. I thought Jon might collapse from the weight of the moment.

It seems that Leta’s personality has just suddenly exploded, and every time I look away I feel like I’m missing something new. She loves to giggle and smile and cuddle and wrestle, and if another child is nearby she totally spazzes out. She wants to inspect other children, touching their hair and staring mouth agape at their advanced skills. Yes, Leta, one day you will be able to pick your nose. And eat it.

Yesterday I met Beth at Danger Park — she was picking up her older son from preschool nearby, and I needed to let Chuck run around and sniff EVERYTHING VERTICAL WITHIN A ONE MILE RADIUS. I stuck Leta in a swing, and she giggled and laughed at the kids running around the park, the dangerous, deadly playground with pre-historic safety devices on the see-saw and slides. Beth’s younger son climbed the wall of boulders surrounding the playground and announced to everyone, “LOOK! There are ROCKS! To jump off of!” Yes, and hey everybody, where’s the nearest Emergency Room?

When Leta saw Beth she couldn’t stop smiling, and she reached out for her. She reached out for my best friend, arms extended as far as they could go. And when Beth took hold of her Leta snuggled into her shoulder and cooed. How about you just rip my heart out of my body and stretch it around my head and then back under my butt, IT WAS THAT SPECTACULAR.

Later Beth stopped by because we didn’t get to talk that much at the park WHAT WITH ALL THE DANGER AND BOULDERS FROM WHICH TO HURL ONE’S TINY BODY. Again Leta reached for Beth, wanted Beth to hold her and snuggle with her, and when Beth had to leave Leta lost it like she had earlier in the morning when her father left. I jokingly said to Beth, “Looks like she wants to be with you more than she wants to be with me.”

And without skipping a single beat Beth pointed to Chuck lying on the floor by the door and quipped, “Hey. Chuck has his Emily. Leta has ME.”