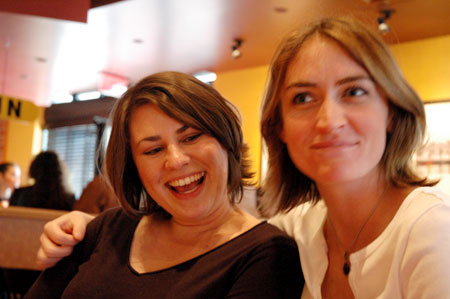 Over the weekend a friend from my childhood, Windy Lou, was in town for a Superbowl Party, and we met her for lunch on Saturday afternoon. She wasn’t so much in town for the party so much as she was for the person throwing the party, This Guy who used to date her friend, but hey. She’s Southern. We’re all up into that. Especially when friends are actually relatives.

She had plans with This Guy three nights in a row, and on one of those nights he had planned a real date. That’s how she explained it to me on the phone, “I cain’t do nothing on Frahdee naught cuz wer goin on a real date.” As opposed to a fake date I asked her, and she explained, “Well, A’hm gettin dinner and wer goin to tha thee-ater.” And then I asked her about cock, would she be getting any, but alas, no, This Guy is Mormon. Apparently Mormons don’t have cock. They got themselves Tools of Divinity that you and the person who OWNS THE TOOL are not allowed to touch.

Windy and I grew up Mormon in Memphis albeit to differing degrees. I was an angel Mormon, the type who prayed six or seven times a day, the type who repented of her first kiss. I was afraid for my eternal salvation all day every day, in every thought and deed. Windy couldn’t have cared less and loved to get into trouble, or at least as much trouble as a Mormon can get in when surrounded by Baptists. Take for instance that time we saw “Great Balls of Fire” in the theater and she threw Gummi Bears and Red Hots and popcorn at the old lady sitting a few rows in front of us. The popcorn actually got stuck in the woman’s hair, and with each flick of her wrist I could feel years of my eternal salvation slipping into Hell. She just laughed and begged me not to tell her father, which of course I did. My conscience wouldn’t let me sleep at night.

All the girls our age who went to Church used to have sleep overs at Windy’s house, and we’d always torture the first person who fell asleep. I know this is common practice among most Gentiles, but it was the most dangerous thing I ever let my soul participate in, covering someone’s face in shaving cream WHILE THEY WERE ASLEEP. MY GOD, THE EVIL. Once we went way too far with our friend, Tricia, and when she fell asleep we put cloves in her mouth and covered her lips in toothpaste. This was all in addition to putting peanut butter in her hair and whip cream on her eyelids. She woke up in the middle of our art project and started CHEWING ON THE CLOVES. Have you ever eaten a whole clove by itself? What about FIVE of them simultaneously? Strangely, the cloves didn’t do as much damage as the toothpaste which burned her lips and left her unable to move her mouth for almost a week.

I am so going to Hell. I just know it.

And then there was this other time we had a sleep over at someone’s lake house with chaperones, Mormon chaperones, and Windy’s influence was just a little too strong. I had this idea, my own idea, to freeze everyone’s panties and then… then… I took a permanent black magic marker and wrote horrible things all over one girl’s face. Nicole was her name, she was so nice, but Windy had lured me to the dark side and I wrote things like 666 and JFK and NAZI and DEVIL all over her face while she was asleep. Across her forehead I wrote out the word BOOB, and she didn’t wake up once.

Nicole spent a few hours the next morning scrubbing the obscenities off of her face all while I draped the frozen panties on the antennas of the cars we had taken to the lake house. I swear we drove for over five miles without the chaperones even noticing the panties flying in the breeze like little rebel flags. I never admitted what I had done to anyone except Windy and now you, so I think we can safely pinpoint that event as the moment Satan took hold of my heart and made me leave the Church and have sex with all those gay men in Los Angeles.

I had a great time seeing Windy again, but it’s Tuesday afternoon and since being around her on Saturday I’m STILL talking like a hick. Windy and alcohol, man. Tools of Divinity, I tell you.