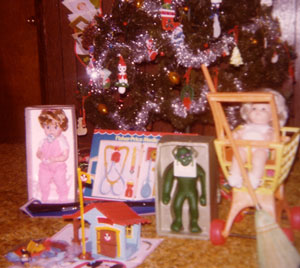 On Christmas mornings during my childhood my mother set out three separate groups of gifts, one for me and each of my siblings. This was part of our holiday tradition, to wake up and see what Santa had brought us and had set in tidy piles according to color. In 1978 when I was just three years old I walked into the living room on Christmas morning and ran straight for my brother’s green pile of gifts. At the front of front of his pile sat a tiny, cuddly Stretch Monster, and I thought he was mine.

I immediately showered Stretch Monster with hugs and tickles. He was perfect, a perfect little monster baby. His body was covered in a luscious rubbery skin that I couldn’t stop outlining with my index finger. I called him Spencer and wrapped him like a little lizard burrito in a pink blanket. My parents had no idea what to do. They had bought Stretch Monster for my brother, but I was undeniably in love. If Leta’s reaction toward being separated from the things she loves is any indication as to how I behaved at that age, my parents probably thought, “How can we surgically attach this green monster to her body?” before they ever thought, “How do we return it to its rightful owner?”

Stretch Monster Spencer and I were inseparable. I slept with him at night and carried him around during the day on a pillow like a gift I was bearing to Baby Jesus. He often took baths with me before bedtime, and I would scrub behind his scaly ears with a washcloth, gently and deliberately to show him how much I cared. Rarely did I ever stretch Stretch Monster, even though he could be stretched the length of the front yard and still return to his original shape, because he had whispered to me that it hurt him. I have never before revealed this secret because Stretch Monster served no other function than to be stretched. It’s like revealing that Superman hurts when he leaps tall buildings or that Wonder Woman gets dizzy when she spins her lasso around herself.

For two years Stretch Monster Spencer was my constant companion, and then my brother kidnapped and abandoned him with a group of his friends. They took Spencer to a neighbor’s yard and stretched him in four different directions until his arm split open. I had followed them to the scene of the tragedy, and when I saw the pink goo oozing out of his wound I began convulsing uncontrollably. I had failed to protect my charming little reptile from the one thing he feared most: death from excessive stretching.

I ran home with his heavy body clutched to my chest and then locked myself in my room so that my parents wouldn’t find out. Would they understand that he was hurt? Would they agree to pay for the surgery? Would they understand that when I had seen his limbs being stretched that I had felt it in my own? And that I needed serious psychiatric evaluation? I was only able to hide my monster and his bleeding lesion for a couple days before my mother noticed sticky pink stains around the house. Within a week she had convinced me that Stretch Monster Spencer was so righteous in his lifetime that he would make it to the Celestial Kingdom of Heaven and would live with God for eternity. I let her bury him in the trash can with the understanding that he and I would be reunited in the afterlife.

Earlier this week I was watching an episode of the NBC series “Surface” about an ocean-dwelling lizard species that’s poised to take over the world when the one redeeming part of the show — the scary, deadly baby lizard — had something terrible happen to it. I won’t give away what happened, just that it was terrible and the teenage boy it had befriended looked like someone had just stretched his best friend to death. Jon asked why I was crying and I hadn’t even thought about Stretch Monster Spencer until that question. It was like my little reptile buddy had been resurrected by this show and we had been reunited.

“You had a Stretch Monster?” he asked unable to believe what had just come out of my mouth.

“It wasn’t just a Stretch Monster,” I said. “He was everything to me.”

“But he was rigid and covered in scales.”

“Then I guess that makes me your Stretch Monster.”