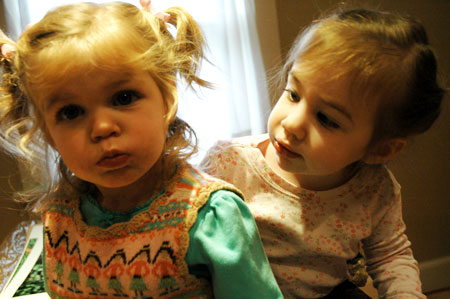 Leta’s best friend, Izzy, came over last week so that her mother, Little Mormon Annie, could watch an episode of “Lost” on our TiVo while the girls imitated the sound of forty bats trapped in an echo chamber. Why Annie can’t get her own TiVo is enough of a subject FOR ITS OWN WEBSITE, but I don’t mind having them over. Leta mimics Izzy’s walking, and I get to talk to Annie about adult topics like stripper poles and whose husband can perform the best leg-behind-the-head maneuver as he spins around the pole upside down. WIN WIN! After Annie finished watching her show we all played a short game of hide and seek. Izzy and I stood behind a door and counted to ten while Leta and Annie ran to find a place to hide, but when I got to EIGHT, NINE, TEN, Leta screamed those numbers from her room in unison with me as if she were making sure that I wouldn’t mess it up, thus giving up their hiding place in an ill-timed display of genius.

Annie asked if Leta was already counting, and after I said that she was I assured Annie that I had nothing to do with it, that it was purely accidental. I don’t make Leta study flash cards or count her beans before she eats them, we just watch a lot of “Sesame Street.” Just how much we watch I WOULD NEVER ADMIT TO, but enough that the actual amount is more embarrassing to talk about with strangers than the record number of days I once went without pooping: 18.

Izzy and Leta play very differently, and I think it has a lot to do with the fact that they excel at different skills. Izzy has impeccable balance and is always on her feet, running from room to room to see what new world lies behind every door. She is also very cuddly and even attempted to cradle Chuck like a newborn. When she couldn’t lift his body off the floor she gave up, smothered his head in kisses and called him, “BABY!” Leta saw this, and having always denied Chuck’s existence by ignoring him, looked at Izzy with complete disgust. YOU ARE PUTTING YOUR MOUTH ON A FERAL ANIMAL. MIGHT AS WELL LICK THE INSIDE OF A TOILET, EINSTEIN.

Leta, however, has never been interested in moving from point A to point B but in dissecting the infinite number of times you can divide the distance between those points by two. She likes to take things apart, and last week when her developmental therapist saw the way she was holding a pencil she said, “Most three-year-olds don’t know how to write like that. Hold me, I’m scared.” Her fine motor-skills indicate that she could disassemble a bomb. “Look,” I told Annie, “they just enjoy different things. Yours? Yours can walk. Ours … ours likes to knit.”