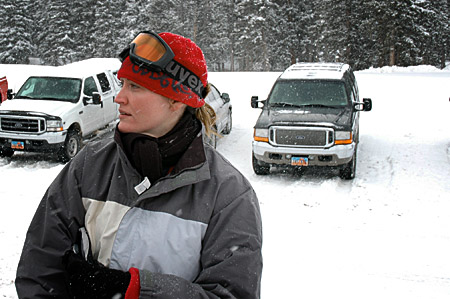 Sunday morning Jon and I headed up the mountain for what would be my fourth attempt at snowboarding. Just before the beginning of ski season we invested in a booklet of passes to Brighton Ski Resort and a bunch of gear on clearance at REI including two new boards, a set of bindings, and a pair of boots a size too small. Jon said that the boots needed to fit tightly in order to maneuver the board properly, but I didn’t care. They were on sale, and I would get to brag about that fact to anyone who would listen.

The forecast called for snow all day, and for once the weather people were right — those people are constantly predicting weather they want to be true and not what nature is actually indicating. Why isn’t The Smoking Gun looking into that large-scale betrayal of public trust? Talk about a conspiracy of lies. James Frey? JAMES SHMEY. There’s a weather man right here in Utah who looks and dresses like a walking corpse, and he’s always predicting snow storms that never happen. He’s practically screaming WHAT MORE DO I HAVE TO DO TO GET YOU TO INVESTIGATE MY INTENTIONS.

By the time we pulled into the resort snow was coming down at a rate of about two inches an hour. That kind of snow makes for great boarding, but it also makes it almost impossible to put on your gear without shoving snow into delicate, sacred places. And this is one of my biggest hang-ups with winter sports, that it requires so much work to even get out the door. I can’t get over how much easier it would be to just sit inside where it’s warm and fondle the inside of my nose with my finger.

I hadn’t tried on any of my gear since we bought it five months ago, and when I attempted to stick my foot in one of the boots it tried to snap my leg off at the ankle. You can ask Jon, I wanted to give up right then and I talked about it, talked about giving up and throwing the boots out the window and driving over them with the car ten or twelve times. He had to walk over to my side of the car and help me put each foot into a boot like I was a baby, and just like a baby I screamed as if he was sawing my toes off with a nail file.

Once we got my boots on, however, I realized that I hadn’t yet put on my snowboarding pants. To give you a clue as to where this is going I’ll tell you that it is impossible to pull on a pair of snowboarding pants over a pair of boots. Physics prevents it. If object A is bigger than the opening in object B, object A is going to have a hell of a time fitting through object B, just ask any woman who’s given birth or dated a closeted gay man. I tore off my boots, rolled down the window and threw them at a passing car.

Four hours later we made it up the hill and I immediately fell off the lift when we got to the top of the first run. As if face-planting isn’t painful enough, no one can fall off the lift in private. The lift operator has to stop the entire lift and once the body is out of the way they blast a siren to signal that the lift is going to start up again. Hey everybody! LOOK! ANOTHER ONE FELL OFF.

Surprisingly I made it down that run with only a few internal injuries, and as the day progressed I hated being there less and less. My muscles quickly remembered which way they had to move so that I wouldn’t die, and by the fifth run I was experiencing a certain amount of glee, a glee particular to the sensation of flying 40 mph through the air without the aid of machinery. It feels like such hypocrisy as a parent — we tell Leta not to walk around with a carrot sticking out of her mouth because she might fall and choke on it, but it’s okay to hurl our bodies down a 10,000 foot precipice lined with trees.