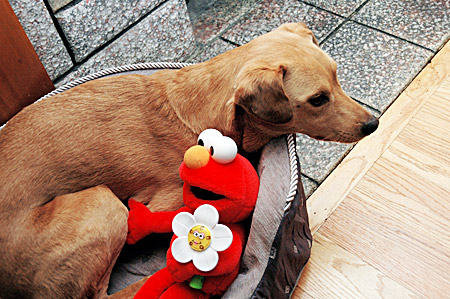 As I sit here typing this Chuck is sitting at the foot of the bed pretending that he isn’t very interested in when the laptop is going to click shut signaling a series of events that could quite possibly end with a trip to the park. But I know that he is consumed with it, obsessed to the point that he is willing to be in the same room as I am. Lately I’ve had to cradle him like a baby to keep him in our company, to prevent him from sulking his way downstairs to be by himself where it is dark and he can practice his potions and Wiccan rituals.

Chuck has never been a loyal dog as he is easily persuaded by any stranger or potential criminal with a treat in his pocket. But this morning as Leta practiced her now ritual 10 laps around the island in the kitchen he followed her around as if she were pulling him on a leash. I ran into the living room for a second to open the blinds and when I came back into the kitchen she was standing dangerously close to the lip of the stairs that lead down into the basement. And Chuck, dog who only shares space with humans because we can stand upright and reach the chicken jerky, he had moved his body so that it was blocking her from moving another inch. I muttered a silent yet thankful ohmigod and Chuck looked up at me like, “This kid is exhausting. YOUR TURN.”

I never thought Chuck would exhibit any protective behavior toward Leta. Even in the beginning when he thought she was a giant pink treat he only occasionally poked his head into her room presumably to make sure the treat was still there. Leta hasn’t been very interested in Chuck either, and the only time she engages him in play is when she imitates us, and that means only to put inanimate objects on his head. But the other night while Jon was reading Leta bedtime stories Chuck wandered into her room — yep! treat is still there! — and Jon tried to coax him into staying, “Stay up here with us, Muffin.”

But he ignored Jon’s invitation and headed back down to his lair. Leta watched as he left her room and in a gesture that I think changed their relationship forever yelled out, “Night night, Elmo-Puppy!”