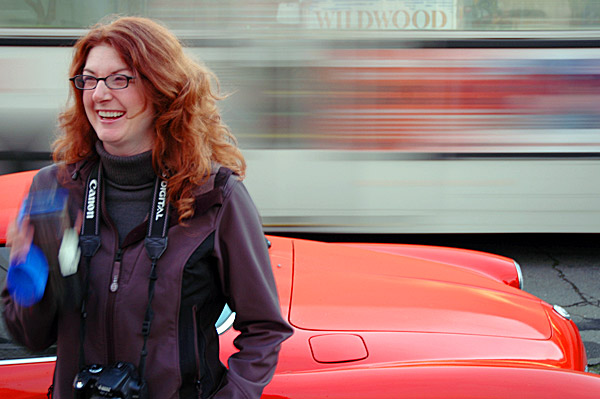 A few weeks ago I was asked if I’d like to participate in a brainstorming session on (mommy)blogging for a company that’s trying to enter the online space. They offered to pay airfare and a night in a hotel if I agreed to spend the day in Menlo Park, California talking about some of my experiences. Jon had been encouraging me to take a day trip somewhere in the hopes that even a few hours away might chill me the fuck out — and it did, I’m happy to report, because I have come to terms with the fact that he unloads the dishwasher differently than I do, and that is okay. It’s okay that he does it wrong.

I was also looking forward to spending a few hours with fellow women who blog, women who have come to this medium for many of the same reasons I have. But once I figured out how close Menlo Park is to San Francisco I knew I had to go if only to have someone else pay for a trip to see Maggie, and this is where I have to rub this in the faces of a few select people out there, people who would give their eye teeth to stay up late and talk about hair product with this specific person: To those select people I say: Behold how awesome I am. I was close enough to her that I got to smell her hair. And yes, it is everything you think it is. More even.

Monday evening we had drinks with Maggie’s husband Bryan. I imagine that if there is a Heaven that the people who stand at its gates and greet the incoming souls have to first go through a boot camp where they are trained to look and act like Bryan in every way. If they don’t then God is a shit project manager. We also met up with Heather and Derek. I had forgotten that bars in California can serve drinks with more than one teaspoon of liquor so by the time they showed up I was uninhibited enough to shower them with my excitement. I almost knocked Derek to the floor by pounding him in the chest, but since he is one of the most polite people in the world the extent of his rage was a brief look that said, “Why are you touching me, strange woman?” Later after dinner we returned to Maggie’s apartment where we stayed up to some ungodly hour talking about everything from how to get our hair to do that to how air-headed our husbands can be when they experience stress. Jon loses his keys, Bryan runs over his computer with his car. The following morning as we were picking up a rental car to drive down to Menlo Park Bryan locked the keys in Maggie’s Karmann Ghia. It was as if he was bringing the PowerPoint presentation of our late night conversation to life with audio and video: Maggie and I picked up Mrs. Kennedy from the airport and then met Melissa for breakfast before our meeting. One of the board of directors of the company who hosted the meeting was none other than Billy from “Melrose Place,” something I could not wrap my head around, and at one point during breakfast Maggie said, “Heather, are you even a little bit excited to meet Andrew Shue? Because you’ve only mentioned that he’s going to be there, oh, 25 times.” I have to give credit to Grace Davis for this photo, because without her I wouldn’t have a picture in my scrapbook of Andrew Shue standing on an office chair pretending that he’s not aware that the giant, awkward woman standing next to him looks like she’s going to bite off his arm. I was afraid that my gravitational force was going to crush his tiny body. I get the feeling that he has to buy his socks at Baby Gap.

Andrew had announced at the beginning of the meeting that he would only be able to stay for a couple of hours, and Grace immediately wrote down a note that said, “Pictures w/Andrew” and then nudged me, a nudge that said everything because no one else seemed worried that they might leave there without a picture of Andrew. I wanted Grace to hold me and wipe my tears because life is made up of little moments where you have to determine whether or not your selfishness is worth making someone else feel exceptionally uncomfortable, and she understood that the answer is always an unequivocal yes. I personally thought the meeting went really well. The executives who hosted the meeting seemed interested in what we had to say, and not once did they interrupt our chorus of unrelated tangents to tell us that we were getting off topic. Which is a sign of people headed in the right direction, don’t you think? Isn’t that what blogging is about? Finding that one sentence of logic in four pages of text that make no sense? After the meeting we drove back up to the city and grabbed a burrito in the Mission. My favorite part about burritos in San Francisco is the fact that they are bigger in circumference than the tires on an SUV and that they are perfectly round like the cross-section of a redwood tree. I thought there was no way I’d finish half of my burrito, but three-fourths of the way through it I saw the light at the other end and rationalized that since I don’t eat one of these things but every six months I would go ahead and finish it. The 5,000 calories wouldn’t hurt me.

Maggie suggested we grab drinks at a place called Blondie’s because one of their cocktails contains the equivalent of four drinks elsewhere. That’s the type of place I want to go when I die. Melissa and I had finished our four-drink drink before Maggie had even taken a sip of her own, and when she looked up and saw our flagrant disregard for sobriety she snarled her lip and said, “Do you have any idea how much alcohol you just had?” Melissa and I looked at each other like two soldiers who had served together in the war. When Maggie up and moves to a place so cold and covered in snow that her internal organs beg her to end the pain she will understand that four drinks is just an appetizer. Melissa then bought us another round.

Sadly I then had to grab BART to the airport and here’s where I’m going to lodge my complaints that have nothing to do with the fact that I had just consumed eight ounces of liquor and a burrito bigger than my dog’s chest cavity. That train looked and smelled like the shoe section at a JC Penney in a bad part of town. Twice I had to get off the train because I couldn’t hear what stop we were at, and the second time I got off I had to wait 25 minutes for the next train. And then when I finally got to the airport ten minutes before my flight left, I was so tipsy I couldn’t operate the touch-screen electronic check-in. Hello, airlines! LOWEST COMMON DENOMINATOR HERE.

I didn’t get home until almost midnight so I didn’t get to stick my face in Leta’s neck to smell her cuteness, but both Chuck and Jon greeted me at the door, tongues wagging and needing their heads rubbed. The following morning when Leta woke up she called out immediately for Daddy which is only fair considering that she had done nothing but ask for me every moment I was gone. When I went into her room to get her out of her crib she sat there and stared at me like, “I got used to you being gone, now please go get me that man who gives me all those M&M’s.”