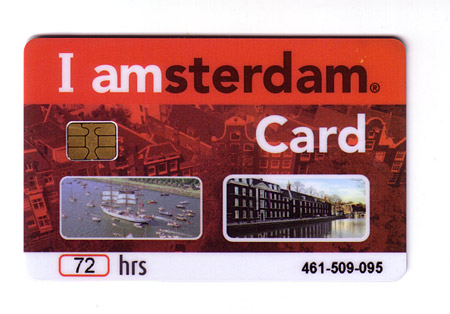 By our second day in Amsterdam the jet lag had finally subsided due in no small part to an over-the-counter sleeping pill, three shots of Oude Jenever and twelve hours of uninterrupted, coma-like sleep. Before we left I had received an inbox full of advice on how to cope with jet lag, but by our first afternoon in Amsterdam we had both been awake for over 30 hours — we were booked on an early flight and then had a four hour layover in Chicago — and none of the suggested techniques worked. We were trying to make it to a reasonable bed time, but by three in the afternoon I was acting like a grumpy two-year-old who has just been told to stop eating toothpaste.

[Quick aside here, I had always feared that I would have a hard time convincing my kids to keep up with their dental hygiene, but we can’t get Leta to stop brushing her teeth. We bought her a tube of Sesame Street toothpaste with Elmo on the label and she carries it around under her arm like a purse. Occasionally she will stop to twist off the lid and press her nose to the circular opening to smell the bubble-gummy goodness, sometimes squirting a small drop into her mouth and that’s when both Jon and I sing a simultaneous warning of, “Ah ah ah AH AH AH!” Which in the universal language of toddler means STOP OR I WILL SHOOT YOU.]

As part of the vacation package we were given I AMsterdam cards which gave us free or discounted entrance to museums and restaurants and public transportation. One of the restrictions on the card, however, was a 72 hour time limit that started the first time we used it. Since we were going to be there for five days we needed to plan our use of the card strategically, but in the haze of our jet lag we went ahead and handed it over to take a canal boat tour. The woman who scanned our cards handed them back to us and leaned closer to emphasize her seriousness when she said, “Your 72 hours… begins… NOW!” Both Jon and I were seized with panic because just like that bus in that one movie with Neo, if we stopped moving we would explode. It was a strange welcome to a foreign country: NOW THAT YOU ARE HERE YOU MUST HURRY. OR DIE.

Friday morning we headed out to browse the museums but not before an important trip to the drugstore. My body had already shifted into involuntary survival mode triggered by the sight of airplane toilets and one particular bathroom stall at Chicago O’Hare that was breeding its own ecosystem. It had been what medical textbooks might classify as dangerously long since I had fully exercised my excretory system, so we went looking for the European equivalent of a fiber supplement. After searching frantically through shelves of pharmaceuticals with Dutch labels I had to give up and ask for assistance, and for the first time in my life I was embarrassed by my constipation. I can write pages about it for thousands of strangers on the Internet, but I could hardly bring myself to suggest to a Dutch saleswoman that I might have ever gone poop in my life. She just seemed too refined to have ever been afflicted with the need to sit on a toilet.

I finally found the courage to walk up to her, and I unconsciously leaned over so that I looked maybe four inches shorter. I said hello and then asked her in Dutch if she spoke English to which she laughed and said, “Duh. Of course!”

That put me at ease a little bit so I continued, “I’m looking for… oh God, how do you say it.. do you know what Metamucil is?” Her eyebrows went crooked and she shook her head. “Citrucel? That stuff you scoop into a glass of water and stir and then you drink it so that you can….” and at this point I made a sweeping gesture with my right arm from my head to my toes as if that were the trajectory of the colon.

“I don’t understand,” she said. I started to sweat at the thought that I might actually have to say poop in front of this woman which in that moment seemed worse than picking my nose in front of the President. I looked around frantically for Jon who was standing at the other end of the store and I yelled, “JON! METAMUCIL DOES NOT TRANSLATE!”

Jon walked over calmly with his head cocked to the side, a smirk on his face that indicated he knew the shortest distance from A to B, and he said one word: LAXATIVE. The saleswoman’s face lit up with a smile and she said, “Ohhhhhhhhhh. We have those!” And then she pointed us in the direction of an entire shelf of products. I know I have said this countless times before, but you really need to be sure before you get married that the person you’re going to share the rest of your life with is willing to do certain things for you, like picking up tampons on his/her way home from work, or holding your hand as you push out the baby, and certainly stepping in at the right moment and finding that one word that will prevent you from dying in a foreign country.