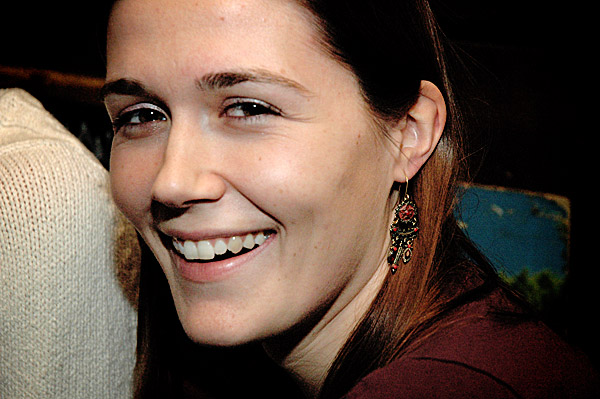 One of my favorite experiences from our recent trip was meeting up with some of my readers who call Amsterdam home. On our second night in the city after a long day of touring museums — the few hours we spent at the Van Gogh Museum alone made the whole trip worth it; having studied art there were a few moments when I had the instinct of a rabid fan to fling my panties at a canvas — we met Joke (pronounced YOKA) and Saron at a beer-tasting bar only a few streets from our hotel. Upon meeting both of them I had the distinct feeling that once I posted a picture of them in conjunction with the words RESIDE IN AMSTERDAM that the Holland board of tourism would realize that sending me over was a good idea: The bar, De Zotte Proeflokaal (there’s that double vowel I was talking about), ended up being our nightly haunt for the rest of the trip due to the amazing time we had that night. That and Jon really likes a beer buzz. I can’t do beer, not because I haven’t tried because I have, I have tried, but I cannot reconcile the fact that you have to consume so much before you feel a damn thing. Seriously, if you’re going to be putting that many calories into your body shouldn’t it at least taste like a chocolate cake?

Joke and Saron (and Joke’s finacé and Saron’s husband) were perfect hosts and didn’t mind toasting their large beers against my tiny shot glass, although they did probably go home and laugh about it afterward. They even managed to convince us that we should accompany them to a coffeeshop afterward, and this is the point in this post where my father needs to stop reading. Stop. Now, Dad. Go wash your car or count your money.

[Quick aside here: When we dropped Leta off at my father’s house before we left for Amsterdam my step-brother stopped by to say hello. He and my step-mother were talking in the kitchen and I joined them as my father grabbed Jon and took him downstairs. I can’t take Jon over there without my father tackling him and having him fix something on the computer. I asked my step-mother what was broken on the computer this time when my step-brother made a very characteristic joke about how it was all those nasty sites my dad was visiting on the Internet that kept making it go haywire. I shot back that no, my dad is not that type of man, and besides, I could say with much confidence that the reason his computer is always broken is because he won’t stop reading my website and when he does he can’t help but kick in the monitor.]

Dad? Are you still reading? Because you should stop. I fear for your blood pressure.

A coffeeshop in Amsterdam is the place where it’s legal to buy and smoke pot. I had decided before we left that I wasn’t going to risk losing an entire day in a foreign country to crippling paranoia, but you try saying no to women who look like that. My senses were numb having just spent four hours downing shots of Dutch gin which is probably why in the end it was the best pot-smoking experience of my life. We passed two mixed joints (pot and tobacco) among six people which wasn’t enough to make the police dogs at the airport turn around when we walked by but it was enough to make Jon the funniest person in the world.

We giggled the entire walk back to the hotel, and even though it was already two in the morning we stayed up for almost an hour laughing at each other. He laughed at me because I was high, but I wasn’t high. I was laughing because he was acting high. He assured me that he wasn’t as high as I was, that he was laughing only because I was acting high. But I wasn’t that high, everything was just funny. This went on and on until we both passed out with chocolate bars hanging half-way out of our mouths. Right before the room went dark I asked Jon if he ever got the feeling that smoking pot opens up the passageways of our minds and enables us to see the true beauty of life right down to the molecules. He answered, “No.”

It will no doubt open up a discussion with my family about what caused my father to have a heart attack while sitting in front of his computer.