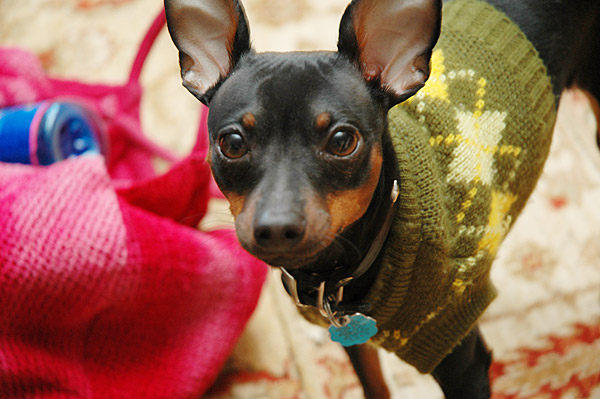 A few days ago our occasional babysitter brought over her sister’s miniature pinscher, Bronx, and without thinking I let them into the living room before running it by our resident Gremlin of the Underworld. When Chuck saw Bronx he performed the ritual sniffing of the sacred regions and then determined that Bronx was a chocolate treat clad in argyle wrapping. Three times I had to prevent Chuck from eating Bronx before I realized that by letting Bronx into the house I had triggered Chuck’s instinctual need to protect his territory. So I ordered everyone outside where the two dogs could meet on neutral ground, and once we were up the street on an indiscriminate stretch of sidewalk Chuck got Bronx halfway into his mouth before the argyle sweater got caught on his front teeth.

Chuck hasn’t ever been a vocal dog, reserving his few barks for the taxidermist who lives next door and sometimes for a snowman across the street who he thinks is a strange man spying on the house. A few weeks ago the taxidermist’s wife rolled out a stuffed ox? or a mountain goat? maybe a yak? into their front yard and parked it like a statue next to their porch. Thing liked to have scared the shit out of me, it looked so alive and capable of forming complex sentence structures. The evil part of me took over when I walked Chuck right up to it and just as his hackles went up I roared like a lion being violated by a taxidermist’s arm. Our dog jumped three feet into the air without a running start, and now he won’t pass that house without being carried.

I understand why he’s angry at the resurrected livestock, but I couldn’t figure out why after almost an hour of interaction he wanted to tear Bronx’s limbs from his tiny chocolate body. At first I thought it might be the two gigantic balls hanging intact between Bronx’s legs, or the way Bronx would rub those intact balls in a rhythmic motion against Chuck’s face. And then I thought it was the way Bronx flitted about the living room in a distinctly cat-like fashion, often gliding across the two-inch beam on the back of the couch like a gymnast or a flamboyantly gay ice skater.

It wasn’t until Leta came running into the living room that it all made sense, and it was then that we witnessed the embodiment of what we had hoped the relationship between the dog and the baby would one day become. Chuck immediately threw his body in front of Leta, and the more she tried to work her way around him, the more forcefully he used his body to shield her from the Chocolate Cat.

Bronx tried to contort his body in unimaginable ways to get at Leta — kids are always covered in dried food and must seem like giant walking lollipops to dogs — but Chuck growled and bared his teeth as a warning that he would sacrifice his own body before he would let his sister be defiled. We’ve never seen him be so protective of something, not even a rawhide bone or a slice of beef jerky. Leta should feel lucky because I can’t think of a better compliment from a living creature.