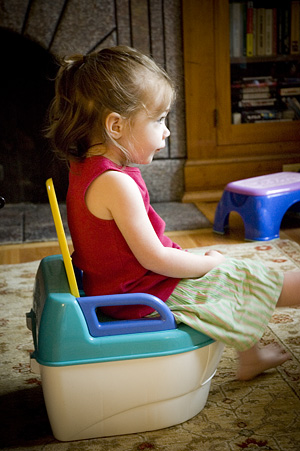 We’ve been introducing the concept of the toilet to Leta for a while now mostly by letting her follow us right into the bathroom to watch as we go potty. You don’t really think about these things until you’re trying to teach another person, but she has to be introduced to the concept of pulling her pants down, to toilet paper, to wiping and flushing. This is also that monumental turning point in her life when she learns that Mama has a bunky, and Daddy? Well, Daddy has a Snuffleupagus.

We had struggled with what we were going to teach her to call her parts, and before you freak out and call the police because we’re encouraging our child to nickname her vagina, don’t I know that now that I’ve allowed such aberrant behavior she’s going to grow up and nickname the severed limbs in her deep freezer, let me assure you that we’ve gone ahead and taught her the correct anatomical designations as well. It’s not like we’re calling it her Wallace or her Supreme Chancellor Palpatine.

We decided on bunky because it was cute, and there was no possibility of it being confused with any other inanimate object. I mentioned here once that we were considering bunky, and I got a frantic email from one of my readers begging me not to choose bunky, please, don’t do it, Bunky was her mother’s name. WHAT ARE THE CHANCES OF THAT? And why did she have to tell me because now when I hear it all I can think of is an imaginary silver-haired woman wearing a floral apron and garden clogs, not that her mother was that sort of domestic type, I don’t know, I’ll never know, she could be a ball-breaking attorney who wears Jimmy Choos, Ball-Breaker Bunky, but that image lodged itself into my brain and now whenever I talk to Leta about my bunky I can’t help but envision a vagina preparing a pot roast and then sewing the button back on a festive Christmas sweater.

Often while I’m using the bathroom Leta will stand in front of me with a wad of toilet paper she’s torn off the roll. She rocks back and forth from one leg to the other in impatient anticipation of The Best Part, the wiping bunky part, which is awesome because it means I’m almost done and she is this much closer to Sesame Street. “All done?” she asks, and without waiting for me to give an answer she hands me the wad and says, “Wipe bucky, huh?” This amuses me more than it should because there is a very outspoken reader of this website who goes by the name Bucky Four-Eyes, and the fact that my daughter is invoking her name when referring to a vagina is as perfectly reasonable as if she were mentioning God’s name in a prayer.

To take her toilet lessons a step further we had my mother bring over a training potty on Sunday afternoon. We hoped that if Leta thought it was a present from Grandmommy she would be more fascinated with it, and that she would approach it with as much excitement as she would an interaction with Grandmommy. My mother is going to be aghast that we’re teaching Leta to associate the toilet with the Avon World Sales Leader, and at the same time proud of me for my motivational management technique.

Leta loved her new potty and has wanted to carry it with her everywhere she goes. In fact, when we told her we weren’t going to take the potty with us to the grocery store she was as upset as if I had told her she had one month to live. Yesterday morning she grabbed me by the hand and led me to the bathroom where her potty was sitting next to the bathtub. “Want potty,” she said and tugged on it to indicate that she wanted it relocated. I picked it up and asked her where she wanted it and then followed her into the living room where she pointed to a spot in the middle of the floor. I expected that parenthood would entail a lot of humiliating moments, but never did I once suspect that I would be reduced to the job of Potty Butler.

After I set it down, I walked back into the kitchen to grab my cup of coffee, and when I returned I found her sitting on her potty watching television, lid up. As if it were a La-Z-Boy. This makes sense because her father takes so long to use the bathroom you’d think he was in there watching “Matlock.” She’s catching on.