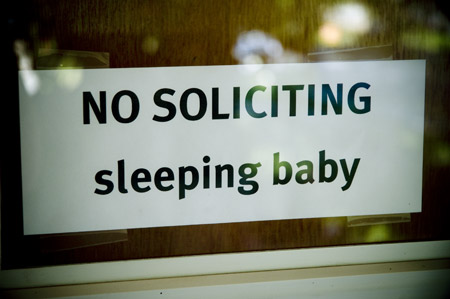 When Leta was four months old I scheduled my days into ten minute increments so that I had something to look forward to: the next ten minutes, which meant that the previous ten minutes were over. Each increment brought me, step-by-step, closer to that magical moment when Jon would come home from work, and I could hand him the baby, walk out the front door, and sit on the sidewalk in front of the house to plan the escape I would never make. I could go down the street this way, toward Iowa and maybe get a job at a gas station where I could sell air fresheners in the shape of Christmas trees. Or, I could go that way, to Burger King. The options, they were endless.

It was during this vulnerable time that a teenage boy knocked on our door and sold me a magazine subscription. He said he was trying to raise money for his high school baseball team, and that if I wanted I could have the magazine subscription made out to a kid at the local children’s hospital so that he would have something to read while being treated for cancer. There was no way I could have foreseen that this was a scam because one, I hadn’t slept in four months, and if someone had come to the door selling breathable air I would have paid them for it. Two, the opportunity to give a dying child his own copy of US Weekly? HERE’S MY CREDIT CARD. What could be more uplifting than seeing photographic proof that celebrities are just like us, that even if we become wildly successful and famous we still have to pump our own gas? Celebrity tabloids, the great human equalizer.

When Jon got home that night I told him what I had done, right before I walked out the door in the direction of someplace else. He didn’t need to shake his head in disbelief because I felt stupid enough, particularly about the fact that it had taken me several hours to realize that a subscription to US Weekly wouldn’t ever cost $60, and that the kid in the hospital enduring chemo, he couldn’t care less that Jessica Alba carries her own groceries.

As someone who grew up in a religion that relied heavily on the door-to-door marketing plan, I have always tried to be nice to people who make a living this way. My brother served a Mormon mission to Quebec in the early 90s, and he often wrote home with stories about how he had spent weeks walking from house to house in the snow and no one would ever open their door. Sometimes people even threw things at him — shoes, books, and once a very large rock — and although I’m now a homeowner who hates being pestered by strangers peddling religion, I don’t agree with that reaction. But I can certainly understand the sentiment as it gets the point across without having to actually shoot anybody.

For several months we had a few signs taped to the door that read NO SOLICITING and DO NOT DISTURB. And they worked, the sales people stopped knocking on the door, but the tape eventually peeled and fell off. Since then we have just stopped answering the door if we don’t recognize the person on the other side. In the off chance that I accidentally open the door without checking first, Jon gave me a script to memorize to make things easier: “Hi. I’m sure you are a nice person, which is why you should get off my porch before my husband comes home and scars your face with a ball point pen.”

Last week during Leta’s naptime someone rang our doorbell only thirty minutes after she had fallen asleep. And it wasn’t a simple, friendly ring. It was a belligerent, vulgar ring that needed its toenails clipped. A DIIIIIIIIIIIIIING DOOOOOOOOOONG where the hard Gs rattled the dessert plates above the sink. Chuck flew through the house and knocked over two chairs on his way to the door, and Jon quickly ran to silence the bedlam. Leta woke up instantly in a mid-nap funk, her entire neck and chest covered in sweat, with a chorus of screams so big they could hardly fit out the opening in her mouth.

The girl at the door was selling magazine subscriptions for a program that was designed to help her communicate better with eye contact and body language. “How am I doing so far?” she asked Jon after he had stepped out onto the porch. Jon handled himself like a civilized adult, and although he had every inclination to show her how his clogs could be flung instantly from his feet like a cannon, he told her he wasn’t interested, thank you anyway. And then he immediately came inside and made a new sign to tape to the door: