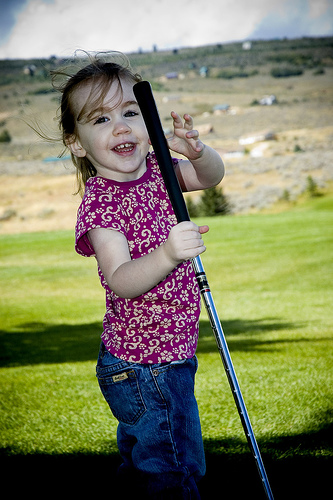 A few weeks ago when my niece was babysitting Leta I walked in the door from a doctor’s appointment to find the two of them sitting on the couch watching Barney. My instinct was to run to the television and shield it with my body as if it were porn, but instead I gathered as much strength as I could to remain calm. As a parent I understand the dynamic in which the more you become outraged at something, the more your child will become interested in that which causes your nostrils to flare involuntarily. It’s the exact reason why, having the father that I have, I would be the first person in line to buy a 12-month calendar of Bill Clinton in a red, white, and blue Speedo.

I asked my niece why were they watching such filth, and she shrugged. “She asked for it,” she said.

“I’m not lying,” she said. “She said she wanted to watch Barney.”

I knew this couldn’t be true for a couple of reasons. One, Leta has never seen Barney, would not know who he was if his four-ton purple body fell through our roof into our living room. Two, I have made painstaking efforts to ensure her ignorance of this abomination as there are limits to what my mortal flesh can tolerate, and Insufferably Perky Dinosaur Who Sings Off Key is at the top of that list.

This cannot be happening was all I could think. This is what it will feel like when she grows up and sneaks off to her room to watch Fox News. Or starts wearing festive Christmas socks.

I picked up the phone and called my mom. My step-father answered, and when I asked if Leta had ever watched Barney while she was in their care he let out a bubbling cackle as if he were drunk on the blood of Satan.

“Indeed, she has,” he said. “We also showed her The Wiggles. And fed her licorice.”

Now that every goal I had as a parent has been totally screwed, I told Jon that it didn’t matter anymore, he might as well go out and buy Leta a pair of clogs. Always one to exploit an opportunity, he did something far, far worse: ripped into my chest, tore out my heart, tossed it onto the driveway, and ran it over with the car.

He introduced her to golf.