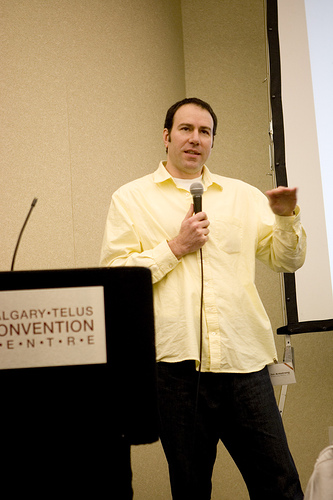 We returned late yesterday from our stay in Calgary, a beautiful city whose skyline is at least three times the size of Salt Lake City. The weather was not nearly as oppressive as we had prepared ourselves for considering that we were expecting to dodge polar bears and penguins on the sidewalks. It was still bitterly cold, but the natives kept reassuring us that they were experiencing a warm spell, many of them bragging that they had often water skied naked in temperatures lower than this. I think that may have less to do with their stamina, though, and more to do with how much beer they drank with breakfast.

Last year when Jon and I visited Vancouver we were both struck with the unpretentious hospitality of Canadians, and this trip did nothing but reinforce that impression. People there are refreshingly gentle and laid back, and when I announced that Jon and I were in Calgary I got seven emails in a row with the exact same subject line: “Welcome to Calgary!” Each one with a single exclamation point, and that says a lot about the people who sent those emails, that they don’t feel the need to go about abusing extraneous exclamation points to prove just how emphatic they are. They knew I would understand the emotion behind the single punctuation mark — our city, it is fair and agreeable, we welcome you here — and that adding any more punctuation would be the Internet equivalent of shouting in my ear with a megaphone. They took that into careful consideration.

The conference was one of the most enjoyable I have ever attended, and not just because I got to go back to the hotel room and make out with the guy who gave the speech about logo design — the talk of kerning just gets me all hot and bothered. Jon’s presentation was fantastic, and because I had never before seen him present I was blown away by just how much of a performer he is, as funny and personable as he is in normal conversation. I also give him credit for keeping his shit together in front of a crowd of people who had just heard me read the following quote aloud from this entry:

Do you know how awkward it is to meet someone in a professional situation now? “Hi, Iâ€™m Jon Armstrong, and I grope my wife while she unloads the dishwasher. BUT YOU ALREADY KNEW THAT.”

I had warned him before my speech that I might pull that one out, and he just waved it off and said that if I did he’d introduce his talk with, “For the next hour I’m going to demonstrate several innovative ways to feel up your partner.” And I think he would have had the crowd not been as mixed as it was. About halfway through my own speech I got the feeling that I was making some of the more conservative attendees uncomfortable, so I skipped over 10 pages that talked entirely about my boobs, or at least about how my boobs have affected the story arc of my online identity. I was going to segue into the last part of my speech by reading an excerpt from this entry where I talk about using cabbage to soothe the swelling of my engorged boobs, which may not seem relevant except that the hormonal shift that took place during the two weeks after I stopped breastfeeding Leta contributed greatly to the frame of mind I was in when I checked myself into a psych ward. And, I’m sorry, call me juvenile, but there is not much else in this world that could fulfill me as much as standing in front of a large group of strangers and telling them that I once put a vegetable in my bra.

I’ve posted and will be posting photos from our trip to my flickr account. Already one of my favorites is this one of Jon during his presentation talking about how tall he was in first grade.