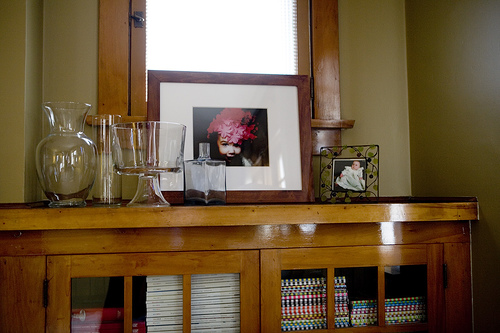 In classic Armstrong fashion our new year began when we walked into Leta’s room yesterday morning to find that she had decorated her body with puke during the night. Red twizzler puke. With chunks of refried beans and a glaze of Sprite. A festive quiche of holiday vomit. It was in her ears, in her hair, up her nose, wrapped around each knuckle, lodged in the zipper of her pajamas. Her right hand had been covered in puke so long that when I finally washed it off, her fingers were so swollen with wrinkles that she couldn’t even wiggle them. They were frozen in place. Stuck. Five little rigid reminders of what can happen when someone lets a toddler go to bed with gum in her mouth.

This particular instance (as opposed to the many other instances of high-quality negligence) was a total accident, because when I brushed her teeth the night before I didn’t see the gum anywhere in her mouth. In fact, I didn’t realize she had been hiding it until I found it in her hair while I was washing partially digested twizzlers out of her ears. I’m thinking that she choked on the gum in the middle of the night, and a wave of stomach acid filled with dinner and dessert came to the rescue and dislodged it from her esophagus. I do realize that this means we are about, oh, this far from letting Leta wander out into traffic in nothing but a short-sleeved shirt and a diaper. But this is a new year, a new beginning! And my first resolution is to make sure that when she escapes the house while I’m napping on the couch, that I do the right thing when the police return her to me and offer them a cold drink.

I haven’t ever been a fan of New Year’s resolutions because they always seem to fizzle out after two or three months, sometimes after two or three hours (see: that one time I tried to give up vodka). But after the royal head knocking that was 2006 I feel like I need to start the new year with some goals, and after taking inventory of my life I’ve realized that it is brimming with mountains of junk, quite literally. So over the weekend I started cleaning, and by late yesterday I had thrown away almost five large garbage bags full of crap from the living room and dining room alone, junk that has moved with me to California and back, THAT I PAID SOMEONE TO MOVE FOR ME, junk that has no meaning other than that I’m very bad at throwing things away. Today Jon dropped off a couple of those bags at a local thrift store, and I just know that the instruction manual to the alarm clock I used in college is going to be an entertaining read for some very lucky bargain shopper.

Here is what the right side of the mantel looks like now that I have removed three dead plants: Notice that I have thrown away all those annoying works of literature that I used to store in the built-in cabinetry and have replaced them with back issues of Wired and Real Simple. Because Robinson Crusoe never showed me in three easy steps how to organize my closet. THAT’S WHY.

Here is the center of the mantel supporting three photographs that Jon and I have taken. I finally replaced the images that originally came with the frames, one of a loving couple that looked a lot like us except the woman was smiling and the man still had all his hair: Here is the left side of the mantel where I have started a collection of sea green vases like every other healthy 70-year-old: The tall one on the right was a Christmas present from Jon. This is also the first of way too many artificial flowers you will see, and although I have poked fun at my neighbors in the past for having plastic flowers in their yard, I should point out that these are inside my house. There is definitely a difference, and when I figure out that difference I will let you know.

Here is the piano in the dining room, and the only difference now is that I’ve put away all of Jon’s sheet music: BUT! I dusted! (the only person who will be impressed by that is my mother) And moved some things around, including the vintage blue glassware I inherited from my Granny Hamilton, the relative I’ve always resembled most, she who gave me my pointy chin and ability to find value in the most useless pieces of junk. That woman was a pack rat, kept everything she ever owned, and a part of me feels like I am betraying her memory by getting rid of all this clutter. But I’m thinking that I could make her proud in other ways, say, by throwing rocks at people I don’t like and washing my dishes in the bathtub.

Here is the small desk we have sitting on the wall next to the kitchen: This was the biggest project of the two rooms, and after I was done sorting through all the stray papers and pens that stopped working two years ago, I had two bags of garbage to throw out. That’s the iMac we bought a few months before we moved back from California, the model that was made obsolete, oh, one week later. We’ve become emotionally attached to the thing and haven’t got the guts to get rid of it, although all we use it for now is to look up phone numbers or recipes on the Internet. Our babysitter used it to download a bunch of Hip Hop on iTunes, and now I can brag that I own a legal copy of R. Kelly’s “Trapped in the Closet,” Chapters 1-12. Reason enough to have it bronzed.

And finally, the living room table, the dumping ground for everything we have in our hands when we walk through the front door: Look how it sparkles and glistens. That package of baby wipes sitting there on one of the chairs is not technically clutter because I use them at least three times a day. I just don’t have a better place to put them. The plates are another Christmas present from Jon, this set from Anthropologie, and I plan to hang them on the wall somewhere once I find the right wall. No one is allowed to eat on them. Also, no one is allowed to eat on this table ever again.

You will notice that I did not publish any of the “before” pictures. This is because Jon said that the Internet doesn’t need to see what pigs we are, which is sort of ridiculous, don’t you think? It goes against everything I stand for. Which is, whenever you do something terribly embarrassing and gross, TELL EVERYONE.