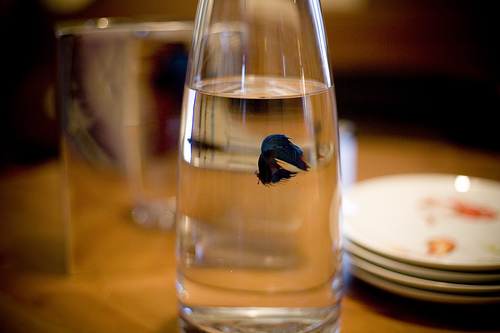 One afternoon about a week ago Jon was on a conference call with a client for about an hour and a half, and soon after he hung up I noticed that there was a message waiting on the phone. Our neighbor had called about an hour earlier to tell us that at that very moment two strange women were standing outside our house, and ooh wait a minute, right now they’re leaning down to put something on the ground, and now they’re running back to their car acting like they hope no one is watching. I was conflicted about what to do because I was scared that if I told Jon, my very paranoid protective husband, he would FAH-REAK OUT and demand that we move to a house in the woods that has no address, and I’d only be allowed to call my mom once a year because someone could be tracing our calls. Although the Mormons would find us anyway.

If I didn’t tell Jon, though, I’d have to go find out what they left in our driveway myself, and if it was a bomb I’d probably lose all my hair.

Turns out it was a fish. A live fish. And since we live in Utah, one of the only places in the United States that seems to be experiencing a winter, it was below freezing outside. So that live fish had been swimming in very cold water for over an hour, which I happen to know is very bad for fish, and do you want to know how I know? Because I accidentally boiled the first fish I ever owned. Thought it would rather swim around in warm water, because me? I’d much rather be warm than cold, why would my pet want anything different? Except once I put him in the water he started swimming in delirious circles, and then tried to JUMP OUT OF THE BOWL. TWICE. I sort of just stood there and watched him, like, fish is crazy! Until he turned upside-down and floated to the top.

Harvard material, I tell you.

This new fish came with a container of food, a small packet of chemicals to add to its water, and a card that had PLEASE TAKE CARE OF ME scrawled in what seemed to be the handwriting of someone who had just learned how to draw letters. We had no idea who left this thing on our driveway, but who are we to say no to destiny? Especially when it is as cute as Lou: When we asked Leta what we should name the fish she suggested the following:

I asked her if she thought Lou was a good name, and she said no. Although I get the feeling that she is going to be just as uninterested in this animal as she is in Chuck, so I don’t care what she thinks. It’s Lou. Sounds like the name of someone who has endured a lot of pain in his life, maybe because of all the long days at the tire factory, maybe because he lost an eye in prison. Whatever it was, that’s all over now. I just wish I had been there to hold him when he needed it the most.

We initially put Lou into a large glass bowl, but over the last several days it has filled up with a load of uneaten food — dude only eats a half a flake a day. Last night I had Jon transfer him to a smaller, cleaner container because my history with changing a fish’s water doesn’t inspire much confidence. Except, he didn’t know what he was doing either. And although we didn’t kill him, we did spend about an hour trying to figure out how to get him from one bowl to the other without contaminating the new water, and it was a bit of a science lab in our kitchen as we pulled out different utensils to see which one would inflict the least amount of harm. Ladle? Too big. Salad tongs? Too sharp. Potato peeler? HOW COULD YOU EVEN SUGGEST THAT.

Eventually I just stuck my hand in and picked him up by his dorsal fin, and that painful life I talked about? Lou has got the fight in him. Almost flopped out from between my fingers a couple times. Once I had him safely into his new home, Jon said something about how the last hour had been the most ridiculous of our lives, how is it possible that we have a human child who will have made it to her third birthday with all of her toes? And I assured him that we were certainly not the only people who were wondering that about us.