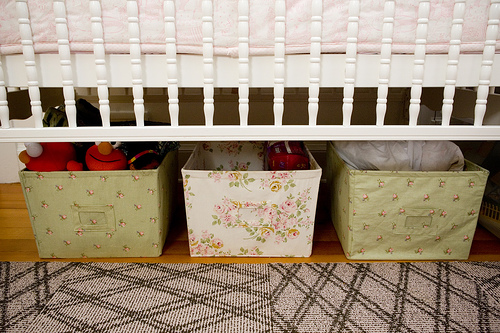 This holiday weekend my War on Clutter continued, and this time it was a thorough attack on Leta’s room, a place that is under occupation by Awful Plastic Overlords. Once again I asked Jon if I could take a picture of the mess before I had touched anything, and he threatened several unspeakable things. Showing anyone that mess, I guess, crosses a boundary, and that’s totally fine with me. As long as that boundary doesn’t grow so big that all of a sudden a paragraph about my boobs is on the wrong side of it.

I started this project by taking out Leta’s large changing table because we are on the verge of potty-training her (something I will not expound on now as that topic alone would require more sentences than have ever been written at this domain), and when we do change her diaper it always happens on the floor. So I bought some very Shabby and yet, very Chic (HOW DO THEY DO THAT, THE SHABBY AND THE CHIC SIMULTANEOUSLY?) storage boxes from Target that I could use to house supplies like wipes and diaper rash ointment underneath her crib. The result? Let’s just say that if I were married to Martha Stewart I would be getting so much ass tonight. The container on the left is full of her favorite toys, while the one on the right is used to hold spare sheets and shoes. Diapers are in the middle. In order for this magnitude of organization to happen I had to throw away pack up almost five boxes of toys that haven’t been touched in over a year. And in the middle of the chaos when I was shoving things into bags, like strange wooden blocks that belong to a toy we gave away during the first year of her life and crappy McDonald’s Happy Meal tchotchkes that glow, she waddled in to see what all the banging around was about. Immediately she fell to her knees and started clawing her way through all the junk. “THIS IS ALL MY STUFF!” she screamed, and not in an angry voice because she didn’t realize that I was getting rid of it. And then she smiled, threw her hands in the air and declared, “I LOVE THIS STUFF!” Right. You love that Hilton Garden Inn ball point pen that no longer works. And that teething ring. And the subscription card that fell out of an Esquire in 2004. That one was my favorite, too.

Once I had the changing table out of the room with all the junk that had sat underneath it, and behind it, and around it in a four-foot mountain of mess, I moved in the wooden stroller than my step-father made for Leta a few months ago: Inside it sits an Ugly Doll and the quilt Jon’s mother made for him when he was a baby, which means it is over a hundred years old. Leta is not interested in the Ugly Doll because it is not a Dora or an Elmo or a Barney or a stuffed animal in the shape of her grandmother. He gets to stay out of the storage boxes underneath her bed, though, because he doesn’t make annoying sounds or beg to be put on a fake toilet, I’M LOOKING AT YOU, POTTY ELMO.

You’ll notice that tin foil is still sealing off her windows. Usually we take it out when the time changes in Fall, but this year it just didn’t seem right to let her peek at the outside world. Would be too indulgent. Also, it makes her room feel like a cave in the middle of the day, and that is good for getting her to sleep for more than two minutes at nap time. Which, in turn, is good for all those times when Jon and I like to sneak off and lie in bed fully clothed. And stuff.

Here is the top of Leta’s dresser, a surface that was previously littered with half-empty Ibuprofen bottles, old clothing, and a mis-matched assortment of hair accessories that were either too frilly or too weak in the face of such a task as Leta’s hair. The print on the left is this Thumbprint Chart of ABC’s from The Small Object, something I bought the moment I first saw it as Leta’s favorite thing in this world, aside from driving me crazy, is the alphabet. The print on the right is “My Friends” by Camilla Engman (shop and blog) whose work amazes me (I have two other prints I bought from her that I need to frame and put up on Leta’s wall). The cross-stitch is from Leta’s Pseudo Internet Godmother, Heather Champ, and I believe she may have come up with the pattern using one from Subversive Cross Stitch (oh yeah, this one). And the dolls? The lovely, most beautiful dolls in the world? Those are Ava the Cat and Molly the Bunny from Loobylu, although I don’t think she has any currently for sale. I have been collecting all of these things for the past three years, and I plan to give it all to Leta when she eventually leaves home, as long as she shares her weed.

Here is a view of the room from just inside the doorway: More toys there on the right in two very cheap (and cheaply made) pink bins from Target, including all her puzzles and blocks and the new doctor’s kit we bought her for Christmas with the hope that it would make her a little more comfortable with her check-ups. Most of the equipment inside made sense to her, but she refused to grasp the concept of the stethoscope and continued to make Grand Mal Seizure Elmo listen to his own heart beat. With that kind of bedside manner she should do well in medical school.

Here is where we read Leta her bedtime stories, or more accurately, where she reads us her bedtime stories. And no matter what book it is, could even be the Bible, it always begins like this: “Hola! I am Dora, and this is my friend, Boots.” Sometimes there is a “once upon a time” thrown in between the hola! and the rest of it. All women are Mommy, all men are Daddy, and all the dogs are Chuck. But then, so are all the cats. This is a lot funnier to me than it should be.

Finally, my closet, which would normally be in my bedroom, if we lived in a normal house and not one that is only two-square feet. The closet in our bedroom is full of Jon’s very tall clothing, so I have to use the one in Leta’s room. And those are the only two closets we have in the entire house. Also, we don’t own a dresser. So this is every item of clothing I own, not including the four bags of Old Navy cargo pants that I’ll be giving to a local thrift store: While cleaning out this closet I found clothing I had never even seen before. Jon cleaned out his closet, too, and I started getting hives at one point because he was tossing out all these shirts of his that have special meaning to me, like the one he was wearing when Leta was born, or the one he had on when I first realized that I wanted to spend the rest of my life with him. It was like he was throwing away photographs from our past, and I had to leave the room. Which makes no sense because I am not usually the sentimental one in our relationship. I am not the one who cries during Mac commercials.

Eventually he agreed to keep the ones that mean the most to me, including the green shirt he wore in the delivery room, something I ultimately want to give to Leta. Which I guess is a pretty weird thing, because what are we going to say? Look, here’s the shirt Dad wore when you were born, and that stain on the shoulder is from your placenta.