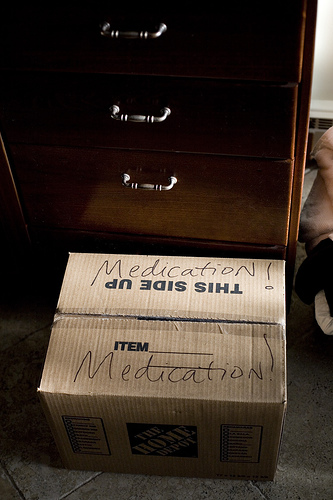 Last night was our first night in the new house after what was an easier move than I had anticipated. Several members of my family and a few friends showed up to help us lift the heavy stuff, and my step-mother stayed by my side the entire day to help pack dishes and a never-ending stream of crap that has been collecting under the bed and in the corners of the house for the last four years. Where did all of this stuff come from? I do not understand how we have allowed this to happen to us, this stuff, this large ocean of meaningless junk that hovers around us like a dirt cloud. A part of me wants to throw everything away and start fresh, but then I wouldn’t have those neon green plastic bowls that I bought for 20 cents at a garage sale in Vernal, Utah, and a life without those bowls, I believe, is a life void of meaning.

Also, have you ever been to Vernal? No? Then you should really add it to the list of things you want to do before you die, right in between stapling your eyelids to a wall and eating a bowl of toenails.

We could not have made this move without the herculean devotion of my family, and I think it speaks volumes about how well we’ve worked through our differences that my step-mother packed and then unpacked our liquor cabinet. The cabinet that had liquor in it. With liquor. In the cabinet. A bottle of vodka here, a fifth of bourbon there, she touched it all with her hands and didn’t say a word, not one word about the burning of my soul in the boiling swamps of Hell. After she had finished unwrapping the final bottle of wine I thanked her and asked if she realized what she had just done. She joked that helping me at all with my liquor cabinet was probably against her religion, but am I not so glad that she was the one who touched the liquor and not my father? AM I EVER. Would be worse than asking my high school boyfriend to buy me a box of tampons.

My dad did, however, move a lot of other heavy boxes including this Most Important Box Of Importance: When he set it on the floor of the kitchen he gave me sly look and asked why I didn’t get a bigger box, because this box wasn’t nearly big enough. I guess you could say that I take a lot of pills. Many. Several. Bunches. A large box full. Some are for my bones, some for my allergies, some even for my skin. Not all are for my Crazy.

After everyone left last night we immediately got down to business and installed the most urgent piece of hardware in Leta’s bedroom: Because I need to get some sleep, and in order to get that sleep my child is not allowed to see daylight. We did order her a set of proper shades, but they won’t be delivered for another week or so, and in between now and that delivery date I’d like to remain a reasonable human being. One who is not awakened at 3 AM by an enthusiastic toddler who thinks it’s time to watch Barney. In the meantime I’m sure the new neighbors are going to eye the tin foil suspiciously, like what sort of hicks have moved in next door, but whatever, I’ll make it up to them by inviting them over for grits and maybe even cooking up the opossum I killed last night with my slingshot.