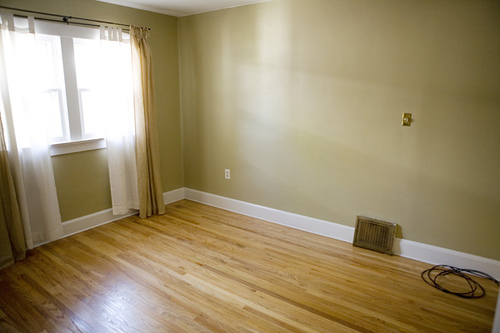 A few days before I left for San Francisco we drove back to the old house to walk through and make sure that we had completed everything on a list of small improvements that the buyer had requested, things like a little paint touch-up here, a bit of minor electrical work there. For a house as old as it is, built in 1926, it’s in incredible condition, and that afternoon as I walked through the empty rooms I could really appreciate the craftsmanship that had gone into building it. Although now, living with so much more space, in a house that has 9-ft ceilings in the basement, I realize that I’m probably not going to miss the sound of Jon slamming his head on the heating ducts downstairs and the consequent hours of grumbling about having bought a House Built By Short People.

Last week we handed over the keys to the new buyer, and she thanked us for leaving the house in such good condition. If I could have I would have wrapped that house in gold paper and sealed it with a giant red bow, that’s how I feel about that place, but God, am I ever so glad that we are done taking care of it. Old houses require so much diligent attention, and if you’re going to live in one you have to get to a place where you can laugh when someone pulls a beach towel out of your sewer line. Ha ha! Remember those good times? That ten thousand dollar hole in the driveway? Oh man, that was a good week! Almost as good as that one time the water heater broke. When I was eight months pregnant. In the middle of December. I was a very pleasant person that day.

I took some pictures of the empty rooms so that we could stick them in a book and later reminisce about all the memories we created there, like that one time Jon and I watched Cinemax in this room and then nine months later a baby suddenly appeared: That was the only time we had sex. Ever. Because oh my God, my father reads this website.

This was Leta’s room, all two-square feet of it, and here is where she first discovered that she had ten toes she could fit inside her mouth: We initially thought this would be a guest room. Before we woke up from the dream called “Childless Marriage” where we moaned and whined because we only got 8 hours of sleep and could go anywhere and do anything any time we wanted and eat at restaurants and see movies in theaters more than twice a year.

Here is the kitchen we remodeled in 25 days: And the old fir floors that started out in great condition but then became increasingly scarred by Chuck’s paws whenever we would suggest a walk or hot sex with the only spayed dog prostitute we could find: Bitch Ranch in Fallon, Nevada. … where Jon turned a wind chime lamp into a ceiling chandelier. He would laugh maniacally everytime the heater/air conditioner would come on and I’d scurry to move the high chair in front of the vent. Because the sound of the wind chandelier was like 70,000 Berkeley new agers catching dreams all at once during a freak tornado sweeping across the San Francisco bay. … where we spent countless hours on the couch and even more countless hours counting with Leta. That kid crawled for the first time in this room and learned to walk along the side of the coffee table with the help of a few physical therapists who helped Leta discover why feet are used. Turns out it’s for pedalling the bicycle generator that turns on the TV during the two hour Oprah/Access Hollywood/Entertainment Tonight block. MOMMY NEEDS HER NEWS. … where most of this site was crafted, cursed and celebrated. It also featured four foot ceilings and was the inspiration for the half-floor in Being John Malkovich.

That house will always be known as “home” because that is how Leta identifies it. Our new house is the “new house” and if we tell her that we’re going “home” she has a minor panic attack because she is so over that old place. She also refers to our X-Terra as “the home car,” and when she sees someone else’s X-Terra on the road she screams, “LOOK! IT’S ANOTHER HOME CAR! A YELLOW HOME CAR!” And I guess that is pretty cute, almost as cute as when she holds her Dora wallet to her ear and says she’s listening to her iPot.