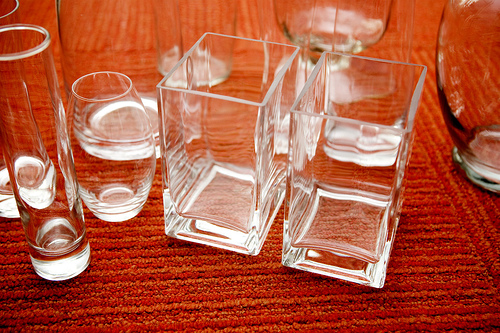 My weekend alone went better than planned, and by early Saturday morning I had completed nearly 90% of the work I needed to get done. So I checked out early and headed home to clear my brain, stopping briefly at IKEA to pick up some Things We Don’t Need, including these two rectangular glass vases for my ever-growing collection of glass containers, or what Jon refers to as Why I Sometimes Expect My Wife To Smell Like Mothballs. Now that I have taken the time to arrange these vases into a tidy display on the rug in the living room, and then pushed it a step further by taking a picture of them, I am suddenly frightened by how proud I am of this collection, of glass, which when you think about it is not much different than someone talking about how proud they are of their post-nasal drip.

I spent the rest of the day on Saturday free from the pressure of having to get work done, and this is a feeling I have not enjoyed for many months, so it was intense enough to seem illegal. That night Jon and I were lying on the couch in the living room catching up on some shows that I haven’t been able to watch this month because I have been spending most of my nights banging away at the keyboard, when one of GEORGE!’s friends showed up. She was wearing a cute dress, and GEORGE! had on a clean shirt, so when he said they were going out for the night, Jon and I believed him. This was mistake number one of the evening, trusting GEORGE! to act like a normal human being.

So suddenly Jon and I are left alone in the living room. Leta is downstairs sleeping soundly, and Our Tenant has left with a girl for the evening, and you can probably see where this is going. And yes, I am going to go there, although I normally wouldn’t because my conservative Mormon father reads this website, and as far as he is concerned his daughter and her husband sleep in separate twin beds, and his granddaughter? She wasn’t so much “born” as she was “delivered to the house via a UPS truck.”

So I look at Jon, and he looks at me, and we both realize we’re thinking the same thing, that we have lived in this house for four months and have yet to christen the living room, if you know what I’m saying. Normally, Jon is the paranoid half of this relationship, and he’s always pointing out those instances when a neighbor or a passing car can see my bare chest through the window as I walk around the bedroom after a shower. And it bugs him that I consider it too much work to walk over to the window to close the shutters, as if I’m almost daring the neighbors to take a peek by being so careless. Of course, this is the same person who is afraid to say “bomb” out loud around the monitor in Leta’s room because the signal might get picked up by a CB radio owned by the government, and next thing you know we’re scrubbing toilets at Guantanamo.

But Saturday night I am the uneasy one because, you know, UNPREDICTABLE COUSIN, and when Jon sees me exhibit that hesitation he jumps up and locks the door. Problem solved! Because there’s no way to get through a locked door. Genius.

So, you know, things start happening, and I don’t even know how to write about this because, while I have detailed the lurid intricacies of my sex life with strange boyfriends, I have never written a word about what goes on in the bedroom between me and my husband. It’s no one’s business, and who really cares to hear about married sex? It’s one of those things single people don’t even want to think about, right up there with what your own dad looks like when he’s plundering your mom’s pink forest.

I’ll just go ahead and admit that there is nudity, like there is wont to be in this type of situation, and within a few minutes there is a cloud of shirts and pants and pillow cushions that has sex-ploded in a giant burst over the entire living room, like a herd of elephants has come through and knocked everything over. And we’re being very friendly with each other when suddenly a strange but familiar noise comes ringing through the air, that of a door handle being vigorously jiggled.

I don’t even remember this happening because it is so lightning fast, but somehow Jon is mid-air within, I don’t know, a blink? And just as quickly he has one leg into his underwear. Now, I have no frame of reference as to what I’m supposed to do in this type of situation. I’ve never had to hide the act of sex from anyone because I started participating in it at an age when my parents were not in the other room. And a part of me thinks that if I close my eyes GEORGE! will just go away. If I can’t see him then he can’t see me. That’s called physics.

Meanwhile Jon is waiting for me to make a move, to hop up and carry my bare white ass to a closet or at least behind a piece of furniture. And I notice that he’s looking very confused, so all I can think to do is grab one of the pillows I have thrown off the couch and cover my body, although come to find out it’s only big enough to cover one body part, not two at the same time, and it’s Sophie’s Choice right there in my living room.

This is when Jon goes hysterical, and with his arm extended in a straight line, his skinny index finger pointing toward the bathroom, he yells, “GO! GOOOOOOOOOOOO!” And then in one athletic leap he clears the couch at the exact second GEORGE! unlocks the door. And GEORGE! is all, oh hey, what’s up, like, are y’all having a party?

Finally, as Jon blocks the door with his naked body, I jump up and run downstairs, leaving behind various articles of my wardrobe splayed across the coffee table. A few minutes later Jon follows fully clothed, and he’s looking at me like he doesn’t know who I am, why would I not race to another room at the first sound of that door being opened? It’s not that I was paralyzed, although maybe I was a little bit, it’s just I really did not want my cousin to walk in just as I was mid-stride in a dash to the bathroom, my sickly white mom-buttocks smacking each other in rhythm to each step.

It made sense to me that I could lie there half-naked, covered only partially with a cushion, and be all? What? Yeah, I’m lying here naked. Why is that so weird?