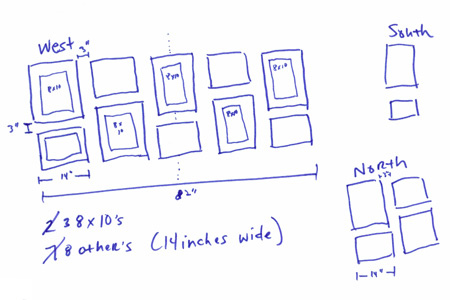 Since posting this photo of the wall of frames in our kitchen last week, I’ve been asked numerous times if I would explain how we got it to look like that, all balanced out and straight and even. It was not an easy project, and I hesitated to undertake it because Jon becomes notoriously grumpy whenever we try to make any little improvement to the house. He’s a perfectionist, so if something is even a millimeter too far to the left he will scrap everything he has done up to that point and start all over again. Otherwise, that millimeter will eat away at his brain, and every single time he walks past that not-perfect thing, he will rant about it and how he should have done it right the first time. And that is not at all annoying.

At our old house we didn’t hang anything on the walls for a few years, so when we moved into this new place I wanted to get started on the decor right away, starting with framing and hanging many of the photos we’ve taken over the years. Our kitchen is gigantic, and there are several walls in that room perfect for such a display, but again. My experience has been that Jon is not fun to be around in situations involving hammers and plaster walls. He does so much rapid-fire cursing and moaning that I start to take it personally, like I am the reason the plaster is crumbling under the weight of the nail, it’s my fault, and maybe if I had just tried harder his life wouldn’t be so unbearable.

Have I ever told you about how Jon frequently talks to himself under his breath? Almost like a ventriloquist. He does it when he’s angry or trying to work through being frustrated, and sometimes I’ll look over and his lips are curled in and silently mouthing a dramatic monologue about how he is fed up with the incompetence of so-and-so or such-and-such. It wouldn’t upset me so much if he didn’t get so involved in the conversation with himself, so wrapped up that he doesn’t even notice HE HAS AN AUDIENCE. Hi, I’m over here watching your mouth move. You look crazy.

I got the idea for this specific arrangement when I saw something similar in Maggie’s apartment. And the first thing we did was draw a diagram of exactly what we wanted, like this: Then it was time to buy the frames, and if I could go back and do this over again I would because these frames were ridiculously expensive. So expensive, in fact, that we couldn’t afford to put any pictures in them for over a month, and they hung on our wall without any pictures inside them for almost five weeks. People would come over and suspiciously eye the wall of empty frames, like, Heather? Have you recently injured your head?

In order to get the frames arranged in a straight line we used a long sheet of wax paper and a laser level. The wax paper served as a template, and we laid out the top row of frames on the ground first, marking the wax paper with a pencil where we intended to hammer in nails. Then we taped the wax paper to the wall along the line made by the laser level. And that’s when I braced myself for the inevitable onslaught of profanity. But it never happened. He didn’t cuss once, because this house was built entirely differently than our last house: by a professional. The architect and first owner of this house was one of the architects of the Washington DC “We’re Off To See The Wizard” Mormon Temple, so the plaster on the walls was applied under the direction of the Spirit of the Lord. You can hammer in a nail, and it stays there, in the name of Jesus Christ, amen. Lining up the second row of frames was much trickier, and we fumbled around with a another piece of wax paper, but it just wasn’t working. So we measured out the spacing for each frame individually — up a little here, down a little there — and although it was a total pain, it worked. In total, hanging up the frames for three walls took about two hours. People, Jon cannot take a shit in under two hours, so this is a shining moment for the Armstrongs.

Most of the photos were taken by Jon, all the arty ones of canyons and fields and interesting structures. I took all the Chuck shots and the two of Leta. I consider Jon to be the better photographer in the relationship, although he always shakes his head when I say that, which drives me insane because I’m trying to give him a compliment and support his killer talent. Everything I know about photography I learned from him and by watching him, and next time he downplays how good he is I’m just going to be all, you’re totally right, you’re a terrible photographer, and by the way, the only reason I married you is because of your great tits. Deal.