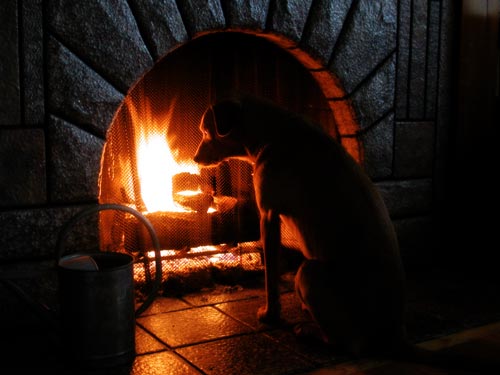 Jon and I spent a few hours today pricing out fireplace inserts because it has snowed three times in the last two weeks, and the dog, he has no pyre around which to pray and speak to dead people. Have you guys ever seen him do that? The communing with things unseen? Let me see if we have any photos of him doing this at the old house… wait… here’s one:

Dude can sit just like that for hours, or at least until the heat becomes so overwhelming that he falls over backwards. He’d roast himself to death if we didn’t pull him away in time, and on many occasions he’ll be panting, gasping for his last breath as we pull his body to the other side of the room, and I’m not kidding, he’ll reach out his front legs longingly toward the fire like we’re tearing him away from his mother. And then he’ll go, “Meow.”

There are two fireplaces in this new house, one in the living room, one in our bedroom, but neither of them are in working order. And now that the weather has shifted from summer into ENDLESS SUFFERING, Chuck is wandering around aimlessly from object to object, from the coffee table to the wall, checking to see if anything gives off heat. Sometimes we, The Humans, are the warmest objects in the room, and his instinct to seek out heat is stronger than his fear of catching cooties. So he’ll stand near us, his back end close to our bodies, his head hanging low and facing the other direction, his eyes fixed on an invisible spot at the far end of the room. Like he’s hoping we will not notice him and then force him to interact with us, because that would be too much to endure, what with all the snuggling and affection and feeling valued. Gross.

Chuck only wants to interface with us when there are treats involved, so whenever you see a picture of a kitchen utensil hanging from his nose you know he was rewarded with a variety of imported cheeses. But then, there is nothing so precious that he will interact with Leta. She could hold out a four-pound bucket of pig fat and he’d walk away, I think because of the energy she puts off, the same one a soldier feels when he realizes he’s just accidentally pulled the pin out of the grenade. He’s always looking at her from the corner of his eye, waiting for a piercing sound to emerge from her face, moving his body so that there is nothing between him and a hasty escape the second anything goes horribly wrong, like say, when her mustard touches her ketchup.

Or when tragedy really strikes and her ice melts.

This morning as I was getting Leta ready for school, Chuck was feeling extra playful. So after every item of clothing I put on her body I tossed his bone a few feet across the room. He’d bring it back to me each time, and this continued until I’d dressed her entirely. She asked if she could try, so I handed her the bone, and he was so caught up in the game that he didn’t realize it was her hand that was holding the bone until she giggled maniacally. The speed with which his ears fell flat to the back of his head was cartoonish, and his wide, happy mouth suddenly melted into a thin, crooked line. I watched his eyes dart from me to her and back, like he was checking to see if I noticed that he had almost played with that thing. And when I didn’t say anything, he stood up tentatively, shook his whole body like he had just stepped out of a shower, and slowly walked out the door without looking back, like, I did not just come this close to interacting with The Addition, you surely must be seeing things.