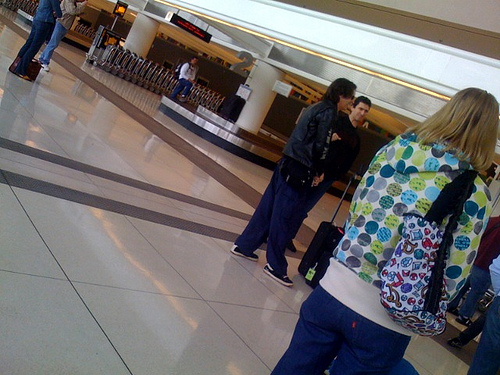 Yesterday I flew to Palm Springs with my good friend Carol to spend some time in the sun with one of her good friends from Wisconsin, so here I am, a transplanted Southern girl hanging out with two transplanted Midwesterners, and the cacophony of accents sounds like a bunch of ducks being strangled to death with a bagpipe. I am constantly making fun of the way Carol says concrete like KAHN-KREET, and she finally had enough and said, you know what? Do you have any idea what the words coming out of your mouth sound like? Here, let me throw up a ham sandwich on your lap. Now smell it.

When we checked our baggage at the sky cap outside the terminal yesterday morning, the attendant came back and handed Carol both of our tickets, as if we were a family traveling together. So I winked at Carol and said AWWW YEAHHHHH, and then turned to the attendant and said, “Carol and I are sharing a bed for the first time tonight. It’s going to be awesome.” He played along and smiled, like, yeah, that’s your business, although if you would like to go into more detail I certainly wouldn’t stop you. I started heading toward the terminal only to look back and see Carol explaining furiously that the only reason we’re sharing a bed is because we’ve booked a room that only has one bed, THAT IS THE ONLY REASON. WE ARE NOT LOVERS. NO I MEAN IT. I am so glad she cleared that up so that I can move on with my life.

Our plane was one of those tiny puddle jumpers that are so small a toddler can’t even stand up straight, and right as I took my seat I noticed a familiar face sitting two rows in front of me. I couldn’t put a finger on his name, and when we landed and a chorus of heads thumped the ceiling, I asked Carol if she had any clue, and she said, “Maybe… Rick Springfield?” THAT IS WHY I WANT TO BE HER LOVER. Because my OCD would have clogged my brain for the next eight weeks with who is he? who is he? who is he? And she was all SUFFER NO MORE. HERE IS YOUR HEALING BALM. So Rick Springfield was standing not two feet from me, and I started to sing “Jessie’s Girl” involuntarily under my breath, and oh shut up, you just go ahead and stand two feet away from Rick Springfield and see if your mouth doesn’t automatically start humming that chorus, there is no way you could resist, it’s like a law of physics or something. And it’s not like I was singing loud enough that he could hear me, but Carol froze as if her body had just entered rigor mortis. “Heather,” she said breathlessly, “please… I really don’t like to have attention drawn to me.”

You may have invited the WRONG person with you on this trip.

Also. Rick Springfield was wearing a fanny pack. And it was so full of stuff that he was almost hunched over by the weight. How sexy is that? It’s like a certain someone who’s all, you know, these clogs I wear are certainly ugly and disease-spreading, but dammit, they’re comfortable, so SCREW YOU.

Right now it’s 66 degrees and perfectly sunny outside, and my plans for the rest of the day are to sip large quantities of alcohol by the pool where I don’t have to wrangle an awful puppy or listen to a four-year-old whine that she wanted four cubes of ice in her water and I only gave her three. THAT FOURTH CUBE OF ICE WAS THE ANSWER TO LIFE. In fact, last night was the first night in over a month that I have gotten more than four consecutive hours of sleep, and not just because Carol was a total snuggle bear. WHO’S A SNUGGLE BEAR? WHO!