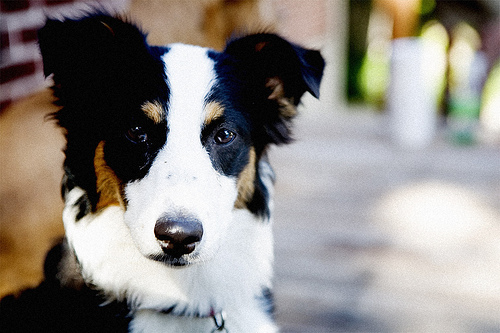 I was on the phone with a friend the other day when she asked how everything was going with Coco. This is the same friend who waxes my eyebrows, and I think I’d been in her house the previous week moaning about being up all night because Coco would not stop making a noise that sounded like she was throwing up. But was she throwing up? She was not, and in fact she was just fascinated that she could produce such a noise. This may be the first time you’ve ever heard this, and I want you to listen to me because I don’t think you’re going to find literature on this anywhere, but all dogs come with a personality defect that I like to call BEING A TOTAL SHIT, and it compels them to do something at least once a day that pushes you until you have mumbled an obscenity under your breath. And not just any obscenity. Dammit or hell will not do, no. You will not get away with a GRRRR! You have to utter something so nasty that the syllables of the word scar your gums as they leave your mouth. Only then will your dog commence being cute.

Things with Coco are fine, I suppose. She sleeps through the night and has total control over her bladder. She’s a good dog in many ways, and we see the potential in her to be a great dog. But she’s still a bit of bad dog in many ways — will not stay on command, will not stop barking at everything on a walk, refuses to fix Mama a hot dog — and I would be able to overlook these things if she would just stop eating poop. I CANNOT GET OVER THIS. Because it’s not just her own poop, it’s Chuck’s poop, it’s the poop from other dogs she finds on walks, it’s deer poop left on the trail when we hike. Yes, yes, I know all the things you’re supposed to do to get her to stop doing this, like feeding her more nutritious food and adding something to her food that makes her poop less appealing, Internet, we have tried it all. IT ISN’T WORKING. My dog enjoys eating poop that has been made less appealing than normal poop.

This is me muttering an obscenity under my breath.

I think my love for Coco is being hindered by this one character flaw. Yes, I love her, but the fullness of my love cannot be realized until I can snuggle with her without the knowledge that my face is being licked by a tongue that has just helped digest poop that is less appealing than normal poop. And it was during this phone call with my friend that I remembered dating a guy in Los Angeles who was very refined and had a great sense of humor, and we got along in every way except for the fact that he talked like a muppet during sex. I dreaded having intercourse with him because in the middle of it all he’d put his mouth in my ear and start talking like he’d just taken a hit of helium. And I was supposed to lie there and not laugh? Not grimace? Not go, dude, that is just WEIRD. Because I totally felt like I was screwing Elmo.

Dreading having sex with your boyfriend is a bit of a deal breaker.

Did this metaphor make the acid in your stomach churn? Yeah, sorry about that, but this is how I feel about my shit-eating dog. She has to stop, otherwise our relationship with be marred by the dread I feel when she runs up to give me kisses. And the only dread I should feel when she’s headed toward me is the usual, god, I hope that dog hasn’t been drinking from the toilet again.