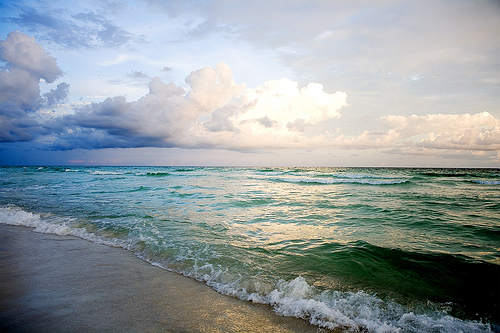 Yesterday morning life hit us like a searing laser of Utah sun at 4:30 AM when Coco began howling wildly to be let out of her crate. We were still high from the smell of salt and sea, our bellies still full of fried everything, our minds still as calm as the line of the horizon over the ocean, so it was a bit of a jolt. An unwelcome jolt. A knife to the eye. A kick in the shin. And before I retrieved that dog from her crate I said aloud something Leta had cried out as I put her to bed the night before: “Why can’t every day be Florida?”

Turns out there was nothing wrong with Coco, and she didn’t even have to empty her bladder. In fact, I think she was expecting some sort of celebration to be waiting for her on the outside of her crate. Her bat mitzvah, perhaps. Where were the balloons? The finger food? The Journey cover band? On and off the bed she jumped, her wet snout in and out of our ears. I let her outside to release her energy, but she stood outside and barked at the door. This went on for two hours. And just as she was about to settle down Leta woke up. OF COURSE LETA WOKE UP. You saw that coming before I even said it, didn’t you? It is a special rule of logic that only applies to parents: if a) you have a child then b) that kid will wake up just as you are falling back to sleep unless c) they are staying with Grandmommy. And if c) is true then you will have stuffed that kid with coffee and chocolate right up until you said, “Be good! See you tomorrow!” Because d) it’s the only way to get back at your mother for introducing your kid to Barney.

This morning Coco slept in until 6:00 AM, except when Jon let her out of her crate she was covered in diarrhea. He could smell it, but because Jon cannot see without the aid of an astro telescope, he did not notice her tracking it through our bedroom, down the hallway where we discovered poo all over the wall, and out the back door. I followed her outside where she hunched over, grimaced, and puked for over 20 minutes. I then spent the next hour bathing her while Jon cleaned up the crate and the fragrant, candied path through our bedroom. When Leta woke up and saw the handful of wet spots where Jon had scrubbed the floor with Nature’s Miracle, she put both arms on her hips, glared disappointedly down the hallway and asked, “Did that dog pee a lot of times?”

I said, no, that’s not pee, but she ignored me, counted each wet spot and informed me, “Eleven. She peed eleven times.” Thank, you, Leta for gathering such detailed data, although I’m not going to be impressed until you’ve shown me some charts.

Jon is currently in bed with a sinus infection (yes, I know, neti pot, he uses one routinely, we think there is a bigger problem), and it’s taken me a few days to catch up with everything that needs to be done when a family returns from a long vacation. Things like having to walk around the pile of laundry, all the energy burned from having to step over the suitcase that still needs to be unpacked. My friend, Cami, took care of our house, fed Lou, and watered all of my plants while we were away, and she said yesterday that the first time she walked into our house it looked like a bulldozer had dumped a landfill in our living room. And I was all, Cami, we were lucky to make it out of the house without killing each other, and even then we almost missed our plane. So if you’re surprised that I would leave my house in such a condition then you can’t be upset when I tell you to suck it.

Yesterday was also the first day of a 21-day diet cleanse that I’ve decided to do that prohibits me from eating any sugar, gluten, caffeine, alcohol, or animal products. It’s the same cleanse that Oprah did, and when I read about how it was making her feel I became intrigued, bought the book that inspired it, Quantum Wellness, and decided immediately it was exactly what I needed in my life. I’ve been meaning to make some major changes in my life, especially since the recent chaos is only going to get more chaotic, and this book outlines some ideas as to how to take charge of the change I want to make.

I’m posting about it here because I think I’ll have more motivation to stick to the cleanse if I post about it publicly, and I plan to say a few words about how I’m feeling every day just to help anyone else who wants to eventually try it. I was certain that giving up caffeine would be the hardest part about this change, but the only thing I craved yesterday was cheese and a bite of Leta’s Cocoa Krispies. And even this morning the espresso machine did not tempt me. I’m also thinking that after the 21-day period is over that I may continue to abstain from meat, for many reasons, the main one being that I can no longer justify the barbaric treatment of those animals just so that I can have a hamburger. It’s as if I’ve finally been hit over the head hard enough, and I’m ready to change my life, from what I eat to how I react to Coco being covered in poop to breathing through the fact that yet again we’ve been jolted awake to a mess.

I want to be a better wife, a more conscious and present mother, a more loyal friend, and a better listener. I’d like to handle my anxiety better. I also want to be more organized because I’m tired and fed up with not being able to find anything. Many times that anything is my head. And starting yesterday I feel like I’m on my way to making every day Florida.