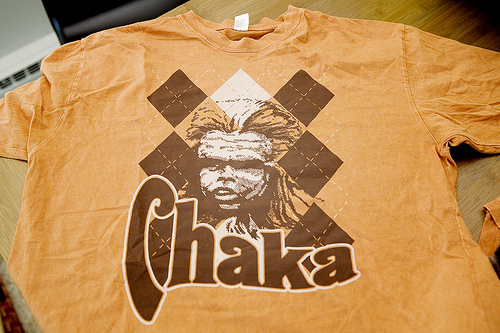 Saturday afternoon I checked my mailbox and found a package from a reader named Lindsey full of t-shirts silkscreened with images of the characters from Land of the Lost. I bet half of my readers haven’t ever heard of that television show, and if you’re one of those people then I am very sorry that your childhood was so unfulfilling. I bet you never owned a My Pretty Pony either. These are surely unresolved issues that you should bring up next time your family gets together for dinner, right after your father turns to your sister and says, “You were always the pretty one.”

I was so excited about these shirts that I actually stripped right there in the kitchen to put one on. I gave a cursory glance over my shoulder to see if there were any neighbors passing by the house, and Jon just shook his head because he knows that even if there had been I would have stripped anyway. It’s not that I’m trying to tempt the old Mormon up the street, it’s just I’d have to walk several feet into another room to find a place that you can’t see from the street and that is just too sensible. The part of my brain that would tell me to walk to another room is missing. It’s the same part of the brain that would stop me from putting on a pair of five-inch heels when I know I’m going to be walking half a mile uphill. In that situation all my brain says is THAT’S WHY GOD MADE BAND AIDS!

I chose to wear the shirt featuring a portrait of Chaka, a small chimpanzee-like humanoid: After I pulled it over my head and straightened it out over the top of my shorts Leta took a step back to admire it.

“I love your shirt, Mama,” she said. I was waving my outstretched fingers around it like a model on The Price is Right, and before I could thank her she continued, “Is that a picture of Daddy?”