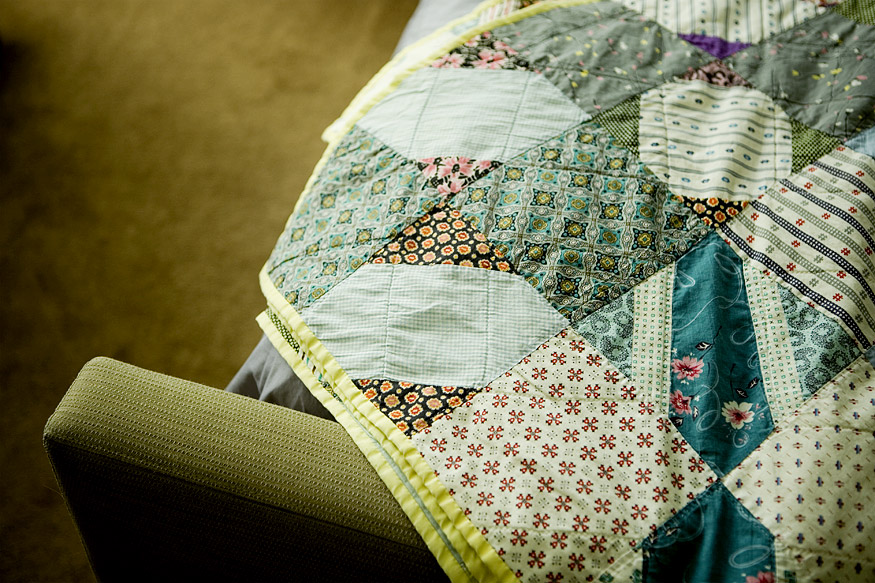 This is a bit of a long story, but I assure you it will be worth it.

My mother’s mother, Granny Boone, was living in Smith Grove, Kentucky when her husband left her with five kids. She picked up, moved down to Bowling Green, Kentucky and found work at a Fruit of the Loom factory called the Derby Underwear Company where she spent her days sewing the waistband onto men’s boxers. At night she waited tables, and that’s where she met her second husband and went on to have four more kids. All nine kids are crazy except for my mother, but that’s a tangent that would take me four years of blogging to explain.

During her two-year stint at the Derby Underwear Company in 1952 and 1953 Granny Boone collected scraps of men’s boxers, and later she sent those scraps to her Aunt Alma who hand-stitched them into quilt tops. Many years later my mother collected those quilt tops, gave them to my father’s mother, Granny Hamilton, and then she did the final work of sewing them into actual quilts. These quilts were set aside and were meant to be given as gifts to my brother and sister and me when we got married. But my mother didn’t think I would ever get married, not when I was a spinsterly 24 years old. Who would want a woman so shriveled up by life? So I got mine early. And then along came Jon and he was all, I like ’em shriveled up!

So the hands of both my grandmothers and a great-great-aunt have lovingly pieced together this treasure. I know you’re not supposed to value material possessions all that much, but this is an exception if there ever was one.