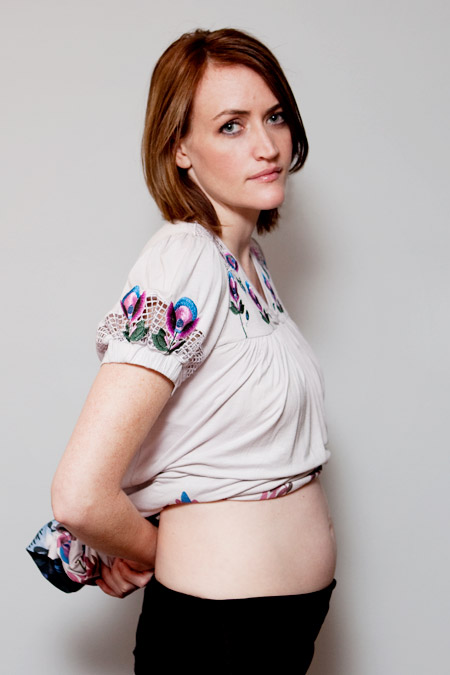 This photo was taken last Tuesday to commemorate the 16 week mark (tomorrow marks 17 weeks for me), and since this photo was taken I’ve actually lost a couple of pounds, probably because I’m no longer retaining water like a bathtub. The debilitating nausea that made those first three months so miserable lasted right up until Christmas night when I spent a few hours in my mother’s bathroom throwing up roasted ham and pecan pie, a combination that tasted just as bad coming up as it did going down. Although, here’s the thing about stuff that comes back up: yes, you get a hint of what it tasted like originally, but the overwhelming flavor of it is vomit, a pretty standard combination of chunks, stomach acid, and awfulness that need only be brought up in a sentence on a blog to conjure the scent of what your elementary school bus smelled like FOR MONTHS after that seven-year-old kid leaned into the aisle and dumped a stomach full of meatballs.

I don’t know exactly when, but a few days after Christmas all that sickness just stopped. All the nausea, all the bloating, all the heartburn, I haven’t experienced any of it for over a week. And this is something to be celebrated, yes, except that the pregnancy now seems rather abstract. Like, oh wait a minute, I’m pregnant. It just doesn’t seem real. In fact, it feels like I’m cheating. There are moments when I feel so good that I find myself involuntarily thinking, ppshaw! THIS IS SO EASY. I could do this a hundred times! And that delusional line of reasoning lasts right up until I sit down on the toilet to go pee and nothing comes out. I go from a high of a hundred to OH MY GOD I’LL NEVER PEE AGAIN.

For anyone who has never been pregnant that line of thinking is not far from OH MY GOD I’M GOING TO DIE ON THIS TOILET.

Already the baby is positioned on top of or near my bladder in such a way that the majority of my day is now spent eking. There is actual eking going on. Jon likes to call it Grandma Peeing. A drip here, a drip there, and then if you’re lucky you’ll get one more drip maybe three minutes later. Five drips tops. I’m in the bathroom for so long in such deafening silence that at first Jon was like, what the hell are you doing in there? Which is not the right thing to say to a pregnant woman because it makes it sound like I’m trying to be sneaky. Yes, I’m in the bathroom devising a plan TO KILL HIM IN HIS SLEEP. Or maybe he thinks I’ve got a secret stash of Twinkies in there under the sink. OH FOR CRYING OUT LOUD, I CANNOT PEE. I’ll certainly get to the devious scheming if you’ll kindly leave me alone with my bladder who is now demanding ransom.