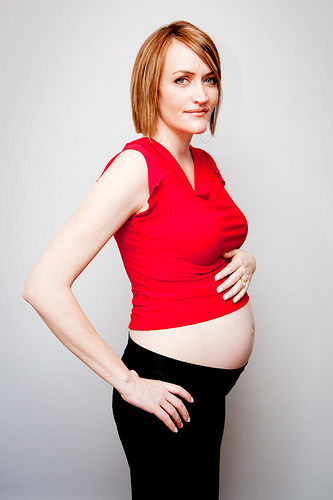 Yesterday marked my 26th week of pregnancy and to celebrate I thought I’d forego the usual sports bra: I never thought I’d say this, but I can’t wait to have my little boobs back. And I know it will be months if not years (IF EVER) until I am reunited with them, but these are just ridiculous. For the first time in my life I am being confronted with the sensation of having the underside of my boobs rub against the skin on my torso, and wouldn’t you know, there was a reason I hadn’t ever added this bullet point to the list of things I need to experience before I die. It’s right up there with having to itch the underside of my belly only to find a stray French fry that had wedged itself in there earlier. When we had burgers for dinner TWO NIGHTS AGO.

Jon doesn’t even know what to say when I change into my pajamas at night and crawl into bed beside him. It’s usually something along the lines of WHOA or DUDE or I WOULDN’T EVEN KNOW WHERE TO BEGIN.

The shirt in this photo is only emphasizing the curves, for sure, and it’s not one I would normally wear when pregnant. But this morning I was up two hours before dawn getting ready to join several other mothers being interviewed over Skype for an episode of The Oprah Winfrey Show that will air sometime soon. The shirt I was originally wearing wasn’t working, and they asked if I had anything in red. I said I’d go check and then remembered I’d bought this a couple of years ago for a conference. When I was 25 pounds lighter. No problem, though, because I rigged the camera on the computer to film me mid-belly and upward. So for all Oprah knows I was sitting there without any pants on, and if that isn’t one of my recurring nightmares. Getting to meet Oprah only to look down and realize I’m partially nude. And when I go to say hello my mouth involuntarily burps the national anthem.