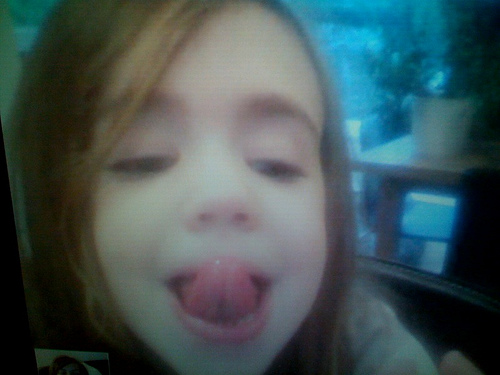 Yesterday I tried to take it easy after flying into Chicago, so I stayed close to the hotel, grabbed a small dinner by myself at an Irish pub across the street, and then settled in for a night of mind-numbing television. I haven’t been to Chicago since 2001, and I know I should be trying to explore the city a bit more, but I can’t take the drugs that would give me the energy to do so. I’m thinking that cocaine abuse isn’t so much an indication that touring rock and roll stars are depraved human beings and more about how they’re just trying to stay awake so they can visit more museums.

Before I set off on this first leg of the tour Jon set up Skype on my computer so that we could call each other over video, and last night we used it for the first time: And for 45 minutes all Leta did was make funny faces. At one point I noticed something hanging off the end of her nose, perhaps a crumb from the Kellogg’s Corn Pops she’d had for dinner, and after I pointed it out to Jon he shook his head shamefully. This was not the idea he’d had in his head of the family connecting through such advanced technology, whereas this was EXACTLY what I had in mind. I basically just picked my daughter’s nose FROM 1500 MILES AWAY. And it was just as satisfying as it would have been had I done it in person.

I could continue with the rest of this story, but it really wouldn’t matter because the whole point of it was to get to that last part about the poop. Because that’s the point in the narration where she almost blacked out from laughing so hard. The bathtub and the cat and the dog and even that random sack of peanuts, all bit players in comparison to the poop. The whole thing could have been about a major national disaster that left thousands of people homeless, and she would have held up her index finger to indicate one more pivotal plot point and said, “And then… there was a sack of stinky stinky poop,” and the moral would have been exactly the same.

I think she may be secretly reading this blog.