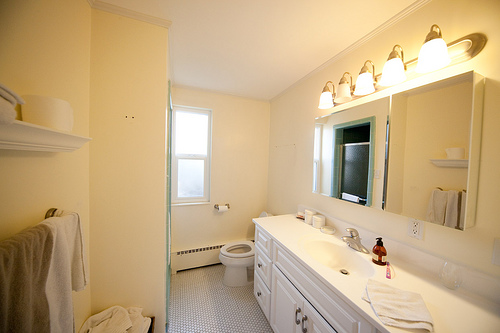 UPDATE: If you don’t normally read the comments on these posts I highly recommend you make an exception in this case. Holy crap, the nutters have come out!

Two years ago when we moved into this house (a process chronicled here, here, here, and here) we knew that at some point we were going to do an entire remodel of the downstairs bathroom. We envisioned knocking down a wall, tearing out every fixture, installing a luxurious bathtub, and doubling the size of the shower. But like with many remodeling ideas, this one repeatedly got knocked on its ass when we realized that simple things like “removal of a wall” would first require completion of a series of other projects. Like say, the blood sacrifice of the first born child and agreeing to name the second one Wells Fargo.

So we’ve lived with the cramped space and rearranged our lives so that it no longer seems weird that the one bathtub in the house is not on the same floor as the bedrooms. But then a couple of months ago I got knocked in the head with a bowling ball of nesting hormones and realized we could make the space more livable with just a few small upgrades. This happened to coincide with a trip to Ikea where Jon spotted a bathroom vanity that he loved, and just like that we embarked on a bathroom makeover. Without any preparation or research whatsoever. While I’m in my third trimester of pregnancy. Because we don’t hate each other enough already.

Let’s start this journey with a few pictures of the bathroom before we used it to dismantle our marriage: Now, let me just go ahead and point out that Jon and I had a conversation wherein he acknowledged that I was not going to be able to help him like he might need me to, that I was so uncomfortably pregnant and clumsy in my body that having me in that tiny space was going to cause all sorts of trouble, and that he might need to call someone else for backup. That conversation went something like this:

Me: “You know I’m not going to be able to do any heavy lifting, right? RIGHT?”

Me: “No, seriously. I CANNOT HELP YOU. You get that, right?”

Me: “So when you reach a breaking point and ask for my help, I’M GOING TO BRING UP THIS CONVERSATION. And then I’m going to make fun of you on my website.”

Jon: “Heather, there isn’t that much to do. It’s going to be fine.”

This reminds me of the book I want to write about remodeling. It would go, “Nothing will be fine. Now go re-read that first sentence. The end.”

The first thing to derail our schedule was the discovery that the previous owners had not tiled underneath the vanity. Yes, we could have special-ordered that hexagonal tile from various places, but the quickest turnaround time we could find was more than two weeks, and HELL if I was going to go 14 days in third trimester pregnancy having to climb a flight of stairs every time I needed to use the bathroom in the middle of the night. So we compromised, installed a square tile that was similar in color, and have trained our eyes not to focus on the glaring difference: And then I broke my toe. And while Jon was assembling the terribly constructed Ikea vanity he pulled a muscle in his back and couldn’t move his torso in any way for three days. But it looks nice, right? That brings us to the 700-lb mirror and piece of crap light. I’m going to condense this story into one bite-size paragraph because otherwise I’ll get going and next thing you know I’ll have used up enough hard drive space to fill a warehouse the size of Michigan:

The wall behind the vanity is in no way whatsoever a level surface, so what should have taken less than an hour sort of snowballed into a three-day expletive-laden tug-of-war between an exhausted man and his basketball-shaped wife. With the man shouting LEAN INTO IT! LEAN INTO IT! and the wife going REMEMBER THAT CONVERSATION?! REMEMBER THAT CONVERSATION?! And at one point we both wanted to impale each other with a Phillips-head screwdriver. Fortunately, it was at that point that I had to go pick up Leta from school, and figuring we could both use a break I decided to run a few errands while I was out. Except I guess Jon was in no mood for a break, and Internet, I have saved on my iPhone the most desperate set of text messages ever transmitted between a married couple. I would share them here with you, but I fear Jon might not ever speak to me again. And I don’t want to raise this baby alone.