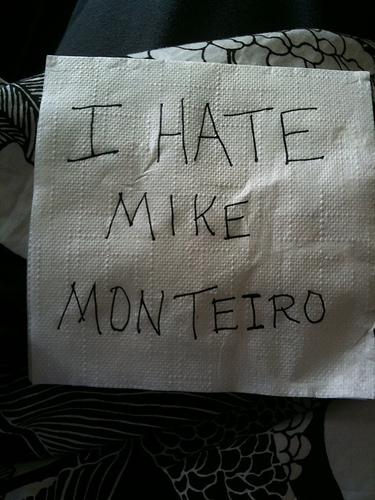 So last week I get a call from a producer at the Bonnie Hunt show, and after we talk for a few minutes she says, “Do you think you could show Kourtney Kardashian how to change a diaper?”

Just let that sink in for a second.

I twittered my thoughts about it earlier, but I never thought that teaching Kourtney Kardashian how to change a diaper was on my lifelist, but THERE IT IS. Right up there with chest-bumping Danny DeVito and seeing if I can get Martha Stewart to hold my gum while I taste test her trademark homemade sorbet.

So that’s what I’m doing tonight during a taping of the show that airs I believe on Thursday, and I’ll let you know if there are any changes to that schedule. But that’s not even what this post is about, although I could probably just end it right there: you guys, I get to meet Kourtney Kardashian today and teach her how to wipe someone else’s butt. WHAT DID YOU DO TODAY?

Let’s just hope it’s not one of Marlo’s diapers, DO NOT EVEN GET ME STARTED on what that kid did as our flight was descending into LAX. And because I had changed both of her blow-out messes last time we did this three weeks ago, it was Jon’s turn to maneuver his abnormally large body plus dripping poopy diaper inside that claustrophobic air hole they call an airplane bathroom. Let’s just call it what it really is: an upright coffin.

Thing is, he was taking forever, and I wasn’t even worried that maybe he’d banged his head against the wall and blacked out because of the turbulence. No. No, I was just hoping, praying that when he came to and realized where he was and walked back to his seat that he wouldn’t make eye contact with Peter Frampton.

Half of my audience just went, who?

Dude, PETER FUCKING FRAMPTON. A quick wikipedia search will tell you that his album Frampton Comes Alive was the top selling album of 1976, and my most vivid memory of him, really, is listening to this certain adult contemporary radio station in Memphis on rainy Sunday afternoons in the 80’s and singing, “Baby, I love your way” really loudly into a hairbrush with a backdrop of pink and teal flowered wallpaper. I’m sure that’s the exact scenario he had hoped that song would inspire, right after world peace.

But he played a HUGE influence in Jon’s childhood. ENORMOUS. Here, let me let Jon tell you in his own words:

Summer. 1977. My older brother Tom brought home Frampton Comes Alive. My first time ever being allowed to touch a double album. I was in love with “Do You Feel Like We Do” and would put on headphones (that we bought for my dad for his birthday; a sweet pair of vented Koss) and assume the position of drummer or of Frampton himself. I knew every note. The little riff on the Fender before the crowd roar as Peter went for the talkbox and started teasing with a few Do You Feels before releasing with Like We Do and the crowd roaring approval. I first faked the drum parts via air drumming and then later did stellar air guitar work. I wore that album out, but I was very careful to clean it before and after playing so my brother would be none the wiser. That album was my first leap into thinking that I could possibly one day play music in front of people.

So when we find out that he is sitting two rows in front of us on the plane to LA, both Jon and I instinctually Twitter the hell out of it as we’re sitting in the terminal, and I’m joking that I’m going to start singing “Baby, I love your way” while we board, because I BET HE’S NEVER HAD TO ENDURE THAT from a stranger.

And Jon is talking about how he’s trying to force me to keep my shirt on, and I’m all BUT MY NURSING BRA, SO HOTT, and someone replied back, really? you have a hot nursing bra? And guys, I only have one that fits me the right way, so even if it was hot back when I started wearing it twelve weeks ago, I’m guessing the frayed straps and sagging elastic make it look less like something you’d find at Victoria’s Secret and more like something you’d see Meatloaf using to wipe the sweat off of his forehead.

And that’s when I casually glance over my shoulder and see Peter Fucking Frampton SITTING RIGHT THERE BEHIND US in the terminal. And he’s on his laptop. And he’s looking at Twitter.

SHHHHH! HEY EVERYBODY! REMEMBER WHEN I WAS TWITTERING ABOUT PETER FRAMPTON? CAN WE JUST FORGET ABOUT THAT?

Jon starts doing the satan ventriloquist thing where his lips aren’t moving, and he’s going FIND HIM ON TWITTER RIGHT NOW, WOMAN. So I do a quick search and, phew! He doesn’t follow me or Jon, as if he ever would, I know, but the feeling was still one of a close call. Except at the time, if he had done a search on his name he would have seen all the replies of people urging and double-dog-daring me to karaoke his music as we board the plane. Note: I couldn’t bring myself to do it. In theory, a great idea, right? In reality, the making of a total douchebag.

So we get settled into our seats, and we’re both checking our phones before they close the cabin doors and tell us that we have to turn off all electronic equipment, and right then I get a direct message from one of our Internet friends nemeses, Mike Monteiro. And he says that if I can get a picture of Peter Frampton holding a “I hate Mike Monteiro” sign then he’ll give me free T-shirts for life (see selection here, we already own a few, including the utterly tasteless “Jackson 4” shirt that I wear around the house when I don’t want to put on a nursing bra, and Tito ends up crying tears of milk all day long, bless his heart.)

Jon looks at me, and I look at Jon, and after maneuvering the baby around a bit, we find a pen and I MacGyver a sign on a drink napkin: It takes me a few minutes to get the nerve up, but I finally hold my breath, hop down the aisle a bit and there I am face to face with Peter Frampton. And next thing you know, I can barely even remember, I’m frantically going MY HUSBAND IS A HUGE FAN AND I LIKE YOU TOO AND WE HAVE THIS FRIEND WHO HAS A CRIMINAL RECORD AND MIGHT CUT ME IN THE THROAT IF I DON’T GET HIM A PHOTO, DO YOU THINK—

And he politely cuts me off and says, “Not now, please, maybe later.”

Oh you guys, I don’t think I have ever been more mortified. MORTIFIED. I felt so stupid, so so so dumb, DUMBITY DUMB DUMB, and spent the entire plane ride jabbing that pen into my skull. So when we’re landing and Marlo shits all over herself and Jon, all I can think is, oh God, please Jon, whatever you do, please do not look at Frampton! DON’T DO IT! LOOK DOWN, LOOK DOWN! And what does he do? HE GRINS AT FRAMPTON. He GRINNED! At FRAMPTON!

And then after landing as everyone is gathering up their luggage I do nothing but avoid looking anywhere near his direction. That’s it. I spent a good ten minutes of my life avoiding eye contact with Peter Frampton. Whoever is in charge at the time, I want that on my tombstone.

And after we get our stroller and car seat and are taking our time walking toward baggage claim, we keep going back and forth about how dumb I feel, and Jon’s all DUDE! PETER FRAMPTON! He’s still reminiscing about that summer in 1977 unaware that I want to shrivel up and die, and OH MY GOD, I am not even kidding, when we get to the baggage claim Peter Frampton is the only one from our flight standing around the carousel. Turns out God doesn’t just like to fuck with you through your appliances. He likes to fuck with you through Frampton.

I immediately sprint with the stroller and the baby to a remote hiding place behind a column next to the door, thinking, okay, he’ll never see me here, and Jon! OH MY GOD! JON! MY HUSBAND. FATHER OF MY CHILDREN. HE WALKS UP TO FRAMPTON. And I’m screaming whispers from my hiding place, WHAT ARE YOU DOING?! STOP! STOP! And I can’t hear anything from where I’m standing, but dear lord god in heaven, my husband is over there right in front of Frampton playing air guitar, swaying his hips, and pumping his hand in the shape of devil horns above his head.

Please just picture that in your head.

I think I fell over dead, or maybe I just blacked out, but I don’t remember at least five minutes of my life. The sweat on my upper lip was so thick that I could have poured it into a 64-oz Big Gulp and had enough left over to water my yard.

And just as I come to, just as my vision starts to correct itself, I look up right as Frampton is exiting the terminal with his family not two feet in front of me. And you guys, this still doesn’t seem real, I’m still processing what happened, but right then he lifted up his right arm and waved at Jon. And then he stopped a few inches in front of Marlo’s stroller and said, “You have a beautiful baby there.”

Marlo, honey, do you have any idea how many 45-yr-old men are insanely jealous of you as this moment? FRAMPTON ACKNOWLEDGED YOU.

We talked about pretty much nothing else yesterday, Jon every other minute singing another Frampton song, pretending to play guitar, sending email to all his high school buddies going, LOOK AT ME NOW! And then when we climbed into bed at the hotel to settle in for the night, Jon frantically poked my snoozing body and said, DUUUUUUUUDE LOOOOOOOK!

Long story to say no, sadly, I didn’t get Mike his sign, so he’s going to have to settle for this: