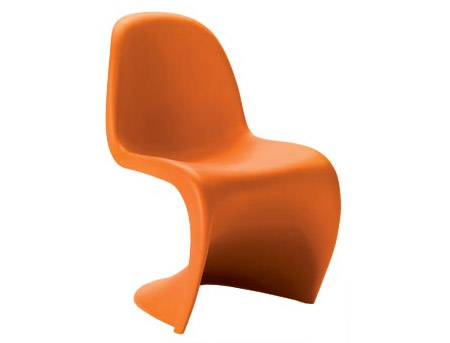 Jon and I have been members of a local gym since I was pregnant with Leta, and last week before I headed in to burn 40 minutes on the treadmill I asked one of the managers about personal training. Why? Because all I know how to do is cardio and a few biceps curls, and the result of all that work is my current figure. The one I’ve had since adolescence. The one that looks like a fancy, modern chair without back legs:

Do you see the part right there where the back of the chair curves and makes the seat? That’s my butt. It is perfectly inline with the top of my body. Or, as the kids might say, BABY DO NOT GOT BACK.

Interestingly, a lot of the weight I gained during my pregnancy with Marlo went straight to my butt, and here’s where I start to give you too much information. But that’s why you come here, right? You don’t come here to listen to me prattle on about health care reform or football or minestrone soup. No. You come here because I’m willing to tell you that while I did not get stretch marks on my stomach, I did grow A MAP OF ALL THE RIVERS IN SOUTH AMERICA on my butt. Because it went from not existing to suddenly I’ve got NASA calling concerned that certain satellites are veering toward Utah.

Anyway, the manager pointed me in the direction of a few personal trainers, and I exchanged email with one whom I met yesterday to see how we’d match up. And after realizing we’d been living parallel lives (see: thinking in childhood that the world might spin off its axis if we did not fast and pray hard enough) she had me perform what she called a “fitness test.” And when I heard the word TEST a certain part of my brain exploded, seized control of all rational parts of my brain, and the first thought that went through my head was, “If I do not ace this test we will all die alone and homeless.”

Pretty much the exact same thought I had every second of high school.

Now, I’m medicated, so I could see from the outside that this thought was ridiculous, but I could also see how awesome it would be if I came away from this being The Valedictorian of Fitness Tests.

Oh, yes. This trainer would talk to the other trainers and say, wow, you should have seen this Armstrong woman. I had to make up a new grade because A++ just doesn’t describe how well she aced this test. And then I would give a speech at fitness graduation, and in the middle of it I’d flex my forearm, grunt and chest bump the podium.

Except, I’ve worked out maybe twice since Marlo’s birth, and while I may be back to my pre-pregnancy weight (thank you, Grandpa Hamilton’s genes) I am not at all fit in any sense of the word. I might be able to bench press a wine bottle, but only if Jon is spotting me. And even then I have to take a nap from all the exhaustion.

So she had me do as many sit-ups as I could do in one minute, and since this was the first part of the test I had no problem. Well, no problem until about the 37-second mark when my abs started revolting and screaming MUTINY! MUTINY! Aim straight for her giant forehead!

And then right away I had to do as many push-ups as I could in one minute. People, on a really good day I can do eight proper push-ups, maybe fifteen if I’m cheating and using my knees. And I haven’t even attempted a push-up since the fall of 2008 before I got pregnant with Marlo. So you will understand that it was no small feat that I did almost 50 (FIFTY!) push-ups cheating with my knees in only 60 seconds. And it will make sense that my arms immediately detached from my body and started hitting me in the face.

Off to assisted pull-ups, then a session of balancing on one of those insane BOSU balls, and then some twisted half-on, half-off the ball maneuver with a weight in one hand magic trick, and I looked down and every muscle in my body was shaking. Like I was being electrocuted. A giant blonde noodle wriggling like a worm. Thank God for this haircut, because I’ve always wanted to look like a lemon-flavored Blow Pop having a seizure.

My instructions then were to keep a journal of my diet and a record of how I was feeling physically. She said that this kind of workout affects the body differently than one that concentrates mostly on weightlifting, and that I might start to feel soreness in several parts of my body. So I came home, opened the door, and then collapsed face-first onto the floor. I asked Jon to write on a piece of paper: ABLE TO INSPECT THE COTTON WEAVE IN THE CARPET.

Wait, make that: soreness in thighs.

Wait, I can’t identify where that soreness is OH, MY CHEST. IT BURNS.

YOU’RE LAUGHING WHILE I DIE.

JON, WE DID ESTATE PLANNING, RIGHT?

Did you know that in order to open any sort of bottle that you have to use the muscles right on the side of your armpit? I discovered this when I couldn’t open a bottle of Advil by myself. Because my armpit was paralyzed. I hope scientists are paying attention because I JUST DID ALL THEIR WORK FOR THEM.

Today’s lesson: A C- would have perfectly acceptable.