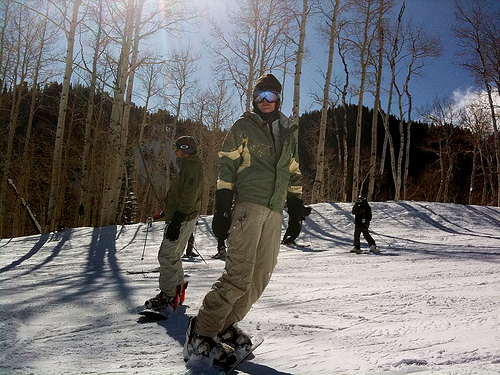 Friday night we drove up to the mountains to spend a few days snowboarding and roasting our toes by the fire. Friends asked if Leta was going to take lessons, and we’d say, yes, lessons for the SAT. I think if given the choice of putting on skis and staring down a mountain or being forced to eat something other than chicken nuggets, she’d give it a few days of thought and then go, FINE. I’LL TOUCH THE LETTUCE.

It’s been a glorious time because I think I have finally put together the logistics of the heel-to-toe maneuvers of snowboarding, and I was killing it! I was flying down the mountain, and it was one of those I GET WHY! moments (see above video). Where many times before I have thought to myself, snowboarding? Why would anyone pay to die? In the cold? With people pointing and laughing.

Jumping out of a plane over Hawaii. That’s the way to go out.

Or maybe asleep in a bed in Hawaii. On the first day we were riding up a lift with two young skiers who mentioned they were visiting from Seattle. Jon asked one of them if he was attending the University of Washington, and the guy let out a tiny laugh and said, no, actually, he was just a sophomore in high school. I told him he seemed much more mature than that, and now that I think about it, oh no. Weird. Crazy old lady snowboarder just called him mature. Is there a more terrible word in our language? Moist, perhaps? Goiter? Nipple?

Toward the end of the ride Jon was joking that I should “try to shred that black diamond run,” and I explained that I’d rather “shred a potato” because “living to see tomorrow” was on my life list. And that sophomore that I had just grossly labeled mature said, “Is it really worth living to see tomorrow if you don’t take risks today?”

Did you really just say that to the crazy old lady snowboarder? The woman who is twice your age and has seen twice as much of life and just last year pushed an eight-pound baby out of her wee waw without an epidural? YOU WANNA TALK ABOUT RISKS? At least, that’s what I was thinking when Jon reached over and squeezed my knee in an effort to say DO NOT DO IT. WOMAN. HE DOES NOT NEED TO HEAR ABOUT YOUR WEE WAW.

So instead I just nodded and said GOOD POINT!

Fast forward to yesterday when three hours into the best day of snowboarding I’ve ever experienced the edge of my board caught the side of a mogul. And I thought I was gonna fly one way but instead flew in an entirely different direction. Head over feet over board, then smack down on my lower back, and finally my skull punched a hole in the ground. My goggles and hat flew five feet away from the scene. I’m sorry, but the whole thing called for some inappropriate groaning. Yes, that’s the horrible noise you heard yesterday.

About twenty minutes after getting my wits about me and making sure I could move all my fingers and toes, I took Jon’s advice and decided to get back on the board and ride all the way down. To face the fear of it. I won’t lie, I was scared. Scared and sore and not sure if I would ever be able to sit down again, my back was so screwed up. But I did it, and after getting down to the bottom of the hill, I set down my board, threw my hands in the air, and yelled HOW’S THEM APPLES, LITTLE BUDDY.