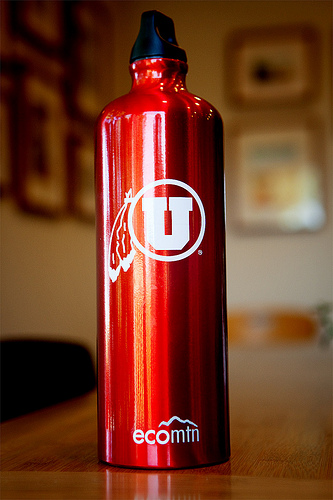 My eighteen-year-old niece Mariah helps us with Marlo several hours a week so that we can run this here Internet Website Blog Thing, and early on we had to make a few adjustments to our day:

Picture: two extraordinarily liberal former Mormons who have had a hard time letting go of inappropriate language, even in front of their young children, going off about something Rush Limbaugh has said.

Suddenly, I stop, cover Jon’s mouth, turn to Mariah and ask, “Um, quick question. Do you believe in evolution?”

She finishes chewing a bite of salad and goes, “Of course not. DUH.”

Conclusion: there have been many, many—okay COUNTLESS times when I have had to say, “Mariah, please cover your ears, because I CANNOT HELP MYSELF,” and then gone on a rant that includes pacing around the living room while I tear at my hair.

There is a Mormon among us now. One who routinely wears clothing emblazoned with the BYU logo. We try to be very respectful of what she believes, and I think we’ve been successful at it. Although, I am the daughter of a prankster. Remember when I posted this? Don’t send the hatemail to me, send it to my dad! He made me this way!

For instance, you may not be familiar with local politics, but the rivalry between the University of Utah and BYU is not unlike the rivalry between Satan and God. These schools despise each other, and Mariah won’t even wear a red piece of clothing because that is the official color of the University of Utah. I am not kidding. I think she may even boycott Valentine’s day and has been known to spit violently on roses.

So one afternoon while I was standing in line to pay for groceries I noticed a display of red water bottles for sale, all the benefits going toward some program at the University of Utah. And because I care very much about “programs” I bought one right then. For the programs! I certainly hope the government is involved in some way! And then at lunchtime as we all sat down to eat, I filled the bottle with water and sat it next to Mariah’s plate. No big deal, I thought. We’d all have a good laugh. Except, Mariah saw it and WOULDN’T EVEN SIT DOWN AT THE TABLE. In fact, she recoiled.

No way. Not in a million years (which is WAY older than the age of the Earth, you know).

So I told her I’d give her ten dollars if she took a sip out of it. NO. Twenty dollars? NOT EVEN. FIFTY? A HUNDRED?! Mariah, I said to her, look, I’ll double your hourly rate and buy you a car! ONE SIP. JUST ONE TINY SIP!

Let’s just say that we spend several hours a week with BYU’s most loyal fan. This doesn’t mean that I won’t strategically place this water bottle right beside the baby wipes so that when Mariah goes to change Marlo’s diaper she has to touch it. Or place it just so in the pantry so that when she opens the door it falls right into her face.

Some experts might call this a hostile working environment. I call it Working With Michael Hamilton’s Daughter.