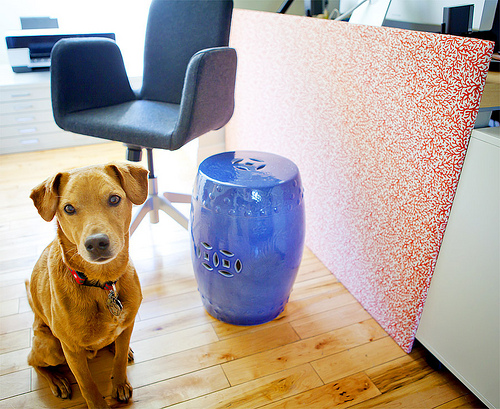 We are finally down to putting the finishing touches on the office remodel with a checklist that might rival a roll of toilet paper in length. Smack in the middle of that list is creating what I’m calling Modesty Panels, giant boards of wood covered in fabric to hide the clutter underneath our desks. Modesty, of course, to hide what is really going on down there next to the hard dri— INSERT DATED BILL CLINTON JOKE HERE. Tangent: we were working out with our trainer the other day, and since I’ve been doing much more cardiovascular work than Jon has throughout the week, he tends to exit the workout before I do. Do you see how diplomatic that last sentence was? How I didn’t brag that I’m in way better shape than he is? Because I totally could have.

He was trying to bring his heart rate back down while I was doing a new exercise my trainer made up where I go down on one knee, then the other, then back up to standing one leg at a time. Repeat at full speed until you see vomit.

It went on and on, and by the time I was done my knees were swollen and covered in splotches several shades of red. I could barely breathe, but I managed to squeak out, “Looks like I’ve been in the Oval Office!” Jon just shook his head and asked why I couldn’t have come up with a more current reference. Right. A more current reference. Having just spent a good two minutes at my anaerobic threshold, my heart rate monitor about to explode. Cut off your oxygen for two minutes and see if you can come up with a better blow job joke.

You guys, I am in so much better shape than my husband.

End of tangent. FOR NOW.

In our old office we had our desks facing each other, and in doing so we solved a couple of problems: one, you couldn’t see the mess of cords underneath, and two, we couldn’t see each other. People used to ask me all the time how I survived working with my husband day in and out, and I’d always recommend turning the desks this way. We were in the same room, we just couldn’t see each other. It could be anyone over there.

Unless you’re really familiar with your spouse’s farts. The illusion sort of fails in this instance.

In the new office, however, it seemed impractical to do it this way, just from the layout and enormity of the room. I also didn’t want to shove my desk up against a wall because I didn’t want to turn my back on the amazing windows and light that fill the room. So here we have this huge mess of cords and machines just sitting in the middle of the floor like a giant dry booger that you’ll want to wait until you’re sitting in traffic to pick.

We were going to gather the cords into nice and neat piles and lines, yes, but I wanted to take it a step further. So I came up with the idea of Modesty Panels, something we could create on the cheap (plywood, batting, fabric, and a staple gun) and attach to the desks we already owned. I even had enough fabric from an old project lying around that we didn’t even have to spend money on that part of it. Look at the resourceful Mormon in me! Next thing you know I’ll be canning our apricots and letting the third wife have an extra night a week with Jon!

Except there were a couple of roadblocks in the way. Tyrant and I were supposed to handle this project ourselves so that Jon could concentrate on other parts of the office, but neither of us have ever upholstered anything in our lives. Two? STAPLE GUN. UGH! No, let me rephrase that: are you out of your goddamn mind?

You guys, I have a really, really crippling aversion to loud, popping noises. I’m allergic to them. They make me break out in hives and speak in tongues. One time we went to a birthday party for a three-year-old where the parents handed out balloons and air pumps, and after an hour of TOTALLY PSYCHOTIC BALLOON POPPING OH MY GOD Jon had to call an ambulance and have me professionally removed.

Enter: that cheap staple gun. Multiply that by: Tyrant’s love of torturing me.

By the time we had finished upholstering the first one I was singing Yankee Doodle Dandy in Portuguese. Backwards. No way, no how was I going to be involved in the second one, so Tyrant finished it on his own. What a great guy, right? Try this great:

Tyrant, on the phone with Jon: “The exterminator just left. He found and killed a black widow in the basement.”

Jon to me: “That guy found and killed black widow in the basement.”

Me to Jon: “Tyrant is lying. He’s telling you that to freak me out.”

Tyrant: “What?! If I were lying I’d say he tried to catch it but it slipped away and went running up to your bedroom singing, ‘IMMA GET THAT BITCH.’”