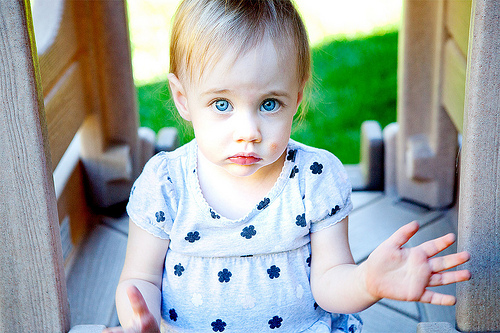 Several weeks ago when Marlo caught the cold that had already afflicted everyone else in the family, we were constantly chasing her around with a wipe to clean up her face before she rubbed it on a piece of furniture. Or on my shirt. Or — and I’m not kidding about this — on Chuck’s head resulting in a tannish dog hair mustache on her upper lip.

Eventually a sore, chapped spot appeared on her cheek, and we tried to be careful to avoid that spot when wiping her face so that it could heal. Have you ever mud wrestled a wild boar? Me neither. But I imagine it would be safer and more sanitary than trying to wipe Marlo’s face.

So her cold finally went away, and we kept waiting for that spot to clear. But that never happened. In fact, it looked like it was becoming more and more chapped. Like maybe she was secretly cuddling with a sheet of sand paper at night. Who knows! I wouldn’t put anything past that kid. She doesn’t learn from pain. Like that one time she was underneath the coffee table and for five minutes she kept hitting her head as she tried to sit up. MOVE TO THE LEFT, EINSTEIN.

Last week I got really concerned that it wasn’t going away, and everyone in the house started making guesses and googling possible conditions. Eczema? Psoriasis? SHINGLES!? And then Tyrant starts telling me about a friend he had in LA whose kid had a rash on her face, and it got so bad that it ate through her cheek and left a gaping hole. I was on the verge of crying when he said that the kid eventually joined the circus as The Girl With Two Mouths because she had taught that hole how to speak and sing opera.

I’m thinking I should rent Tyrant out for parties.

I finally said, screw it, let’s see what the doctor has to say about this and then immediately regretted that decision as I chased Marlo for an hour in the waiting room at the clinic. Last time we were there she wasn’t walking. This time? Totally different. As in, I would rather spend another semester at BYU than an hour chasing my toddler around a waiting room where her sole goal was to put sick people in her mouth.

We finally got in to see the doctor when she took one look at Marlo’s face and was all, oh honey! Your kid has ringworm!

You have got to be shitting me. How appropriate was that diagnosis? I mean, COME ON. My chipped-tooth baby Bobo done got ringworm on her face! Guess I’ll just cover it up with some tape, dope her up with some hill juice, and we’ll cuddle on the bed with some Cheetos and wipe our hands on the sheets!