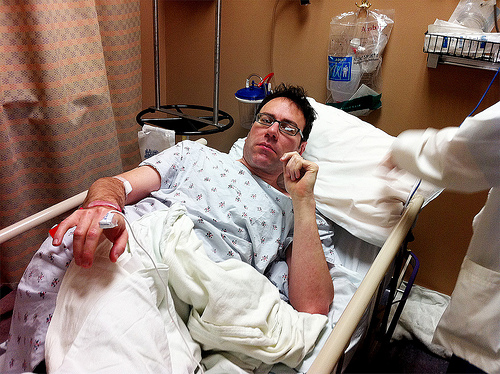 The Saga of Jon’s Mysterious Chest Pain continued last week when I drove him to the hospital so that he could undergo an endoscopy, a fancy term for having a tube shoved down his throat. Yes, all sorts of jokes were made beforehand. Remember, my assistant is a gay man who really enjoys making straight people feel uncomfortable. That’s the first skill he lists on his resume.

They were going to inspect his esophagus and stomach for signs of anything peculiar, you know, lesions or ulcers or Osama Bin Laden. Wait. They found him? In Pakistan? PHEW. I was trying to figure out how we were going to tell authorities that Jon picked him up in Mexico and, my God, the heartburn.

The nurse who explained the procedure to Jon beforehand was incredibly thorough and loving in stark contrast to some of the doctors we’ve seen in the past. I’m not generalizing here, because we’ve seen some doctors who could rival Jesus in their bedside manner. But some doctors… the part of their brain that made it possible for them to get through medical school is so big that there is no room for the part that would make them think twice before saying, “That spot of skin cancer really isn’t that big. I’ve got better things to do.”

Or, “Your daughter sucks her thumb? Make fun of her so she’ll stop.”

I wasn’t allowed to be in the room during the procedure, but I guess it went something like this: they fit him for a mouth guard that would guide the tube into his throat before they gave him a dose of Propofol, a fast acting anesthesia. The drug that killed Michael Jackson. This is important to remember. You’ll see why.

Once he was asleep they inserted a scope into his throat and inspected the specific areas, taking biopsies if needed. From start to finish, the entire operation took twelve minutes. Meaning it lasted way longer than a lot of the guys I dated! Hey-ooh! The nurse brought me back to see him as the Propofol wore off, and here’s where I share with you just how adorable Jon is when he’s drunk. Like, the most adorable drunk in the history of adorable drunks. When he saw me sit down next to his bed, he squinted at me and said, “You’re so pretttttyyyyyy.” And then he spent the next two minutes trying to reassure me that he was not kidding, no seriously, TAKE HIM SERIOUSLY, even though I had not said one word.

The nurse handed me a stack of paper, and I read the first page of instructions out loud to Jon. For the next twenty-four hours he was not to drive a car or operate any machinery whatsoever or engage in any important decision making. And PLEASE, refrain from any activity requiring coordination. For an Armstrong that means no walking.

The whole time I read those instructions Jon would interrupt me every two words and say, “Did you know they gave me the drug that killed Michael Jackson?!”

And then after another two words he’d say, “OH MY GOD, I forgot to tell you. They gave me the drug that killed Michael Jackson!”

“Huh?” he’d spurt out in return. “I don’t know what you’re talking about. But guess what? They gave me the drug that killed Michael Jackson!”

I continued with the instructions letting him tell me over and over that they gave him the drug that killed Michael Jackson, and then when I was finished the nurse walked over to Jon and said, “Could you please sign here to indicate that you understand the instructions your wife just read to you?”

“WHAT?” he shouted in total confusion. “She hasn’t read anything to me! What are you talking about?! Hey, Heather, they gave me the drug that killed Michael Jackson!”

He doesn’t remember about ten minutes of his life, but thankfully those ten minutes weren’t our wedding vows or the birth of one of our children. They were just one message after another out into the ether that when you get an endoscopy you get the drug that killed Michael Jackson. ARE WE ALL CLEAR ON THAT POINT?

Preliminary diagnosis: nothing is wrong with his esophagus. Test indicated a little irritation in his stomach. So, you know, totally inconclusive. Except for the bill. That was pretty distinct and abrasive.