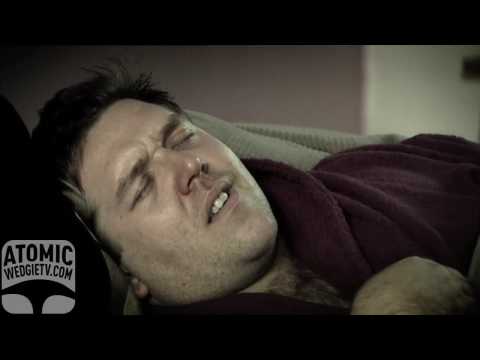 Starting last week my lower back started to flare up, a ten-year-old injury that likes to say hello every now and then. I’m not sure exactly what provoked it this time, but lately Marlo can’t decide if she wants me to pick her up or put her down and all the bending over is probably causing problems. I’m adding this to a long list of things I’m going to bring up during the toast at her wedding that will begin when I hold up a giant poster of my naked butt covered in stretch marks.

I saw my chiropractor twice last week for this issue, and I thought I was feeling better. But yesterday morning when I lifted Marlo out of her crib my entire lower back started seizing. The pain was so intense that I couldn’t walk, couldn’t sit down, couldn’t get comfortable in any position. In fact, I felt like I was in labor. In fact, I started making a noise that would indicate I was in labor, a sound that a vocal, constipated hippo might make while being gutted with a chainsaw.

I give Jon and many men I know a hard time about how they act when they are sick.

And now I have so much crow to eat because I could not stop that noise from coming out of my mouth. It gushed out of my throat, a moaning waterfall of pain. I was, I’m afraid, a poor little bunny.

Since I had already seen my chiropractor for this problem, I made an appointment with a masseuse to see if she might help soothe the knot of muscles in my back. Now, you have to understand, I am one of those people who think it is inappropriate to makes noises when getting a massage. One does not sigh or groan or produce any sound similar to the one made when getting it up the pooper.

So there I am, face down on the table. And already I’m uncomfortable because no position is comfortable, and instead of breathing deeply to calm myself down I’m holding my breath so that I don’t scream. I think this is the scientific process behind volcanoes.

When it was over I could barely put my clothes on, let alone walk to the parking lot and open the door to the car. I felt like I was giving birth and had to drive myself to the hospital. About four blocks from home I pulled over the car, broke down into heaving sobs and called Jon. Could he please meet me in the garage because I’M GOING TO DIE AND I WANT SOMEONE TO HOLD MY HAND WHILE IT HAPPENS.

You guys, I was in so much pain that I didn’t punch him in the balls when he said, “You haven’t taken your meds today, have you.”

NO! I hadn’t! But I would still be crying anyway!

He helped me out of the car, propped me on his arm so that I could climb the stairs to our bedroom, and then he gave me medicine and water and everything I needed to rest comfortably. He was my hero despite the insensitive and TOTALLY uncalled for comment.

Today I’m much better. Loaded up on ibuprofen and ice and more ibuprofen. I can walk and sit in certain positions. Also, I took my meds, so I’m pretty confident that I’m not going to die.