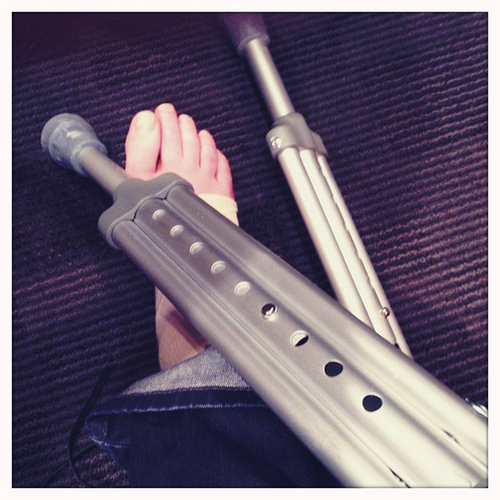 My senior year in high school I broke my ankle during a volleyball game and walked around on crutches for a week until doctors could outfit me with a boot (I’m not sure what its exact medical term is, so let’s just go with Cast That Lets You Walk Around Without Crutches). When you have just run 26.2 miles in under five hours that boot is officially called Endorphins.

You can buy them at any head shop.

This morning before we checked out of the hotel Jon had to run to a local pharmacy and buy a set of crutches because I cannot put any weight on my right foot. It’s bruised and swollen. It was neither of those things last night, so either Endorphins made me temporarily blind and/or numb, or my body had a delayed reaction. Or both. Shows that you should get your Endorphins from a reputable source and not the nephew of your coworker who wears socks patterned with Disney characters and still lives with his mom.

I bring up the high school crutches because I remember how indifferent people were to my injury. How willing they were to let my crutches blend in to the scenery. Not that I was expecting to ride around on a down-stuffed cushion carried by four strapping gladiators. But if you run that business, please email me pics! Or at least do a calendar!

People would see me, see my crutches, and still not hold a door open for me. People would almost knock me over in the rush to get wherever they needed to be. And I totally forgot about that until just now, almost eighteen years later while trying to go through security at JFK. Someone almost pushed me over to get around to his briefcase. And when I almost crumbled to the floor, he didn’t even turn around to give me a hand.

And then in the bathroom just now, the entire counter of sinks was crowded with women, so much that a line started to form. And when a spot opened up and it was my turn to approach a sink, someone brushed past me, ALMOST KNOCKING ME OVER, and stole my spot.

I needed this reminder to pay more attention. Maybe these people have business that is more pressing than some gangly woman on crutches. I just hope that I haven’t been so blinded by the craziness of life that I’ve failed to keep that door open for a volleyball player who landed sideways on her ankle. Because in twenty years when she’s walking through the airport on crutches she’ll remember that door and how insensitive we can be to each other.

Off to the doctor in the morning back in Utah (I can see her now: “You’re here AGAIN?”). Hoping for the best.