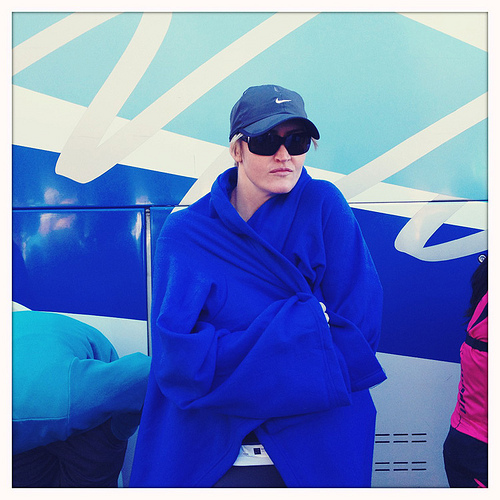 Sunday morning I woke up at 4:30 a.m., got dressed in all my running gear (jet-pack? CHECK!), and stuffed my event-approved bag with snacks and a Smurf-blue Snuggie. A what? A Snuggie. You took a Snuggie to the ING New York City Marathon? I took a Snuggie, a six-pack of Bud Lite and a McDonald’s Happy Meal. How else were the European runners going to know they were in America? The event organizers advised everyone to wear cheap sweat pants and sweat shirts over their running gear because the four-to-five hour wait on Staten Island would be freezing. Before the race started we’d be able to discard this extra clothing and they would donate it all to various charities. I think this explains why I saw a teenage boy in Bangladesh wearing a pink hoodie that said “Miss Varsity Club Homecoming Queen 1998.”

When I ran that half marathon in Moab I watched other runners struggle to discard those extra layers, many of them getting their shoes caught in the hem of a cheap pair of sweat pants. I immediately thought, come on, guys! It’s 2011! AND THIS IS AMERICA. We don’t have to expend energy removing clothing before a race. DAMN STRAIGHT. You can drop a Snuggie like a cigarette butt. Also? It won’t get tangled in your holster.

Do I have to do all of the thinking? The whole team gathered near Times Square and hopped on a bus that took us to Staten Island. We drove over the Verrazano-Narrows Bridge that connects Staten Island and Brooklyn and also serves as the first two miles of the race. At one point we all looked at each other in horror until someone said, “THIS IS THE LONGEST BRIDGE IN THE WORLD.” I added, “I HEARD THAT IT DOESN’T EVER END.” Someone else said, “ACTUALLY, IT DROPS US OFF IN VIRGINIA AND WE HAVE TO WALK BACK.”

It was the beginning of all that horrible thinking that goes on when all you can do is wait for the anvil to fall on your head the race to start. To give my shaking hands something to do I started to fill an adjustable waistband with chocolate GU packs that I’d be eating along the route. A few of them. Okay, fine. Ten of them. The team was like, are you running back to Utah? Because that is a lot of GU. And I was like, listen. When you get to mile 19 and wish you had something to snack on, I’m going to point to my waistband of GU with my middle finger.

Better to be over prepared than dead.

Here’s how much I over prepared: the previous day I had pancakes with syrup for breakfast, toast and a potato for lunch, and a giant bowl of pasta and chicken for dinner. So if during the race my body could not find those carbohydrates, I had plenty ON MY PERSON. Do you see all of this thinking?

The team got to start with the first wave at 9:40 a.m. which meant we had to be in the corral by 8:55. That gave us almost an hour to stand around and mumble OH MY GOD, OH MY GOD, OH MY GOD, WHOSE IDEA WAS THIS, THAT SUPERMODEL DUPED US WITH HER HIGH CHEEKBONES. As the giant mass of bodies moved toward the starting line, people began to discard their extra layers. The only problem was that we no longer had access to porta potties, and in every direction there were humans casually pulling down their pants to piss on the ground. Penises and vaginas everywhere. An occasional hairy buttock.

I thought, genius. How else were we supposed to know which ones were Europeans? There we were, human flesh as far as the eye could see, a bed of discarded and urine-soaked clothing underneath our feet. That’s when I remembered our cab driver from the first night we were in the city. In a thick New York accent he told us that many years ago he and his buddies signed up for the marathon and barely trained for it. On race day when they got to mile 18 and hit the wall a few of them tried to quit. But he grabbed one by the shoulders and said, “ARE WE NOT MEN? ARE WE NOT MEN?”

The mother who gave birth without drugs in me wanted to say, you know, being a man has nothing to do with it, SIR. But his accent was so adorable, and his story was just begging for a Sylvester Stallone interpretation. I decided I’d steal his mantra. So I told this story to Erin, Executive Director of Every Mother Counts, and said that if we stuck together and hit any rough patches we’d need to ask ourselves that question. And then reach down and scratch our balls.