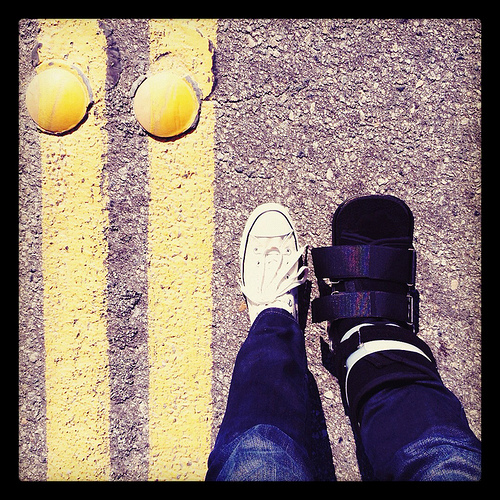 Last Thursday Jon and I headed to Palm Springs to attend Camp Mighty, but not before I noticed that Coco was not acting loco. In fact, she was calmer, more still and morose than Chuck, and when she refused to eat breakfast I knew something was wrong. Coco would eat a tire if it was not attached to a car. Preferably a tire covered in her own feces.

My mother was going to watch the kids, and we were supposed to board the dogs for the weekend. But my instinct told me that Coco needed to see a vet. The rest of this post could just be a neverending string of one THANK YOU after another to Tyrant for what he did for us and that dog. Because if we had dropped her off at the kennel she’d be dead.

The vet had not seen dehydration like that in a dog in years. Two X-rays and a lab inspection of her stool sample showed that she was, well, very very sick. So sick that she’d need to eat and be let outside every three hours. Tyrant texted all of that and a picture of a slightly more perky Coco Thursday evening after we landed in Palm Springs. Not to worry, he said. He’d take care of both dogs. We should relax and have fun with friends.

In the meantime I was navigating the security line at the airport with my space boot. I’ll admit that the boot was a hell of a lot easier to maneuver than crutches, but that moving walkway between terminals? I had to stand to the side because walking was too painful. You guys. The daughter of the Avon World Sales Leader does not stand on a moving walkway. The daughter of the Avon World Sales Leader RACES down a moving walkway to show you that you will never navigate a terminal with that kind of dexterity JUST STOP TRYING. So I picked up my foot in the boot and set it atop the hand rail so that when anyone looked at me and wondered, “Why is that idiot just standing there?” I could point to the boot and say, “I just got back from the moon. I’m tired. SUE ME.”

Have you guys ever been to the Palm Springs Airport? Because it epitomizes every reason I love Southern California: you have to walk outside to get from your gate to baggage claim. That’s how confident they are in the weather, that it’s going to be so fucking spectacular you will totally forget you’re in an airport and instead are strolling through a palm tree-lined path to redemption.

Sorry, Leta. Next year we’re not going to Disneyland in the fall. We’re going to the Palm Springs Airport.

We rented a convertible Mustang and spent a few hours touring the midcentury architecture and marveling at the field of windmills just outside town. While reconnecting with old friends and meeting online friends in the flesh for the first time, my mother was battling a sinus infection and spreading it to Leta back in Salt Lake. My mother could barely form words to describe how horrible she felt, and that’s not the first time I was reminded how lucky we are to have the help that we do. We have the most amazing, generous people in our lives.

So generous, in fact, that they are willing to pull up to passenger pick-up at the airport in this: Tyrant jumped out and shouted so that the surrounding crowd of people could hear, “Hey, Heather! Hey, Jon! I LOVE YOUR CAR! It drives like butter!”