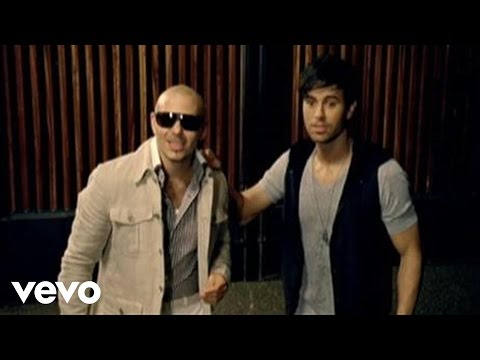 (You can find part one here.)

Back in September I went on a couple of five-mile training runs with Christy and Erin of Every Mother Counts and realized that their pace was a tiny bit faster than my own. Nothing that I couldn’t keep up with, but when I thought about the enormity of the marathon I was pretty sure I’d be running it alone at the back of the pack, my ten GUs strapped around my waist, my iPod stuffed with Enrique Iglesias.

After that last sentence no one can accuse me of being a hipster parent ever again.

I love that you can work out to The Decemberists or Mumford & Sons, that is so cute. But, honey, NO BUENO. I carry around a tiny iPod shuffle that holds two GB worth of songs, and half of all those songs are this one:

How ridiculous is that song? Am I actually admitting out loud on the permanent Internet that I love it? That when I hear it my chest swells with the capacity of Hurculean lungs? If I am sitting down when I hear this song I am compelled to move at least one if not more parts of my body, so imagine what happens if I hear it when I’m running. I shift into falsetto.

You’ve never seen someone run in falsetto? GOD, people. Get your life lists in order!

At the starting line of the marathon I tucked my iPod into the zipper pouch on the back of my running pants knowing that I would run at least the first few miles without it. Many of you told me to take in the energy of the crowds that would line the route, so I wanted to be alert and receptive. Also, I’d be running through Brooklyn for the first ten miles. You can’t listen to Enrique Iglesias in Brooklyn. It says so in The Constitution.

We all stood together as a team, the ten of us, surrounded by so many bodies that it took over three minutes for us to cross the starting line. We held back a bit to let the crowd thin out, and then four of us fell into a natural group right there on the Verrazano-Narrows bridge at mile one: Erin, Lauren, Julie, and me. We didn’t know then, but our little group would stick together for over 23 miles. Those three women will own a part of my heart until I die, and not because the lesbian orgy we had at mile 12 curled my toes.

But first, can I just get a WHAT WHAT for Brooklyn? So many people came out to cheer and roar and clap and sing. Erin and I had written our names on our shirts, and every two or three strides someone would call out for us. We both commented to each other that we were smiling so much that our faces were starting to hurt. Great. Awesome. I was going to sprain my cheek from grinning. THANKS RUNNING.

And then when we got to Queens there was immediate silence. Like aliens had landed and kidnapped the entire human race except for those running the marathon. Queens woke up, realized it was Sunday morning, and thought FUCK THAT.

Early on we came up with a plan to walk through the water stations to conserve energy. Our pace was about an eleven-minute mile, so essentially we’d run for eleven minutes and then walk for twenty seconds. And thank God we walked through those water stations because I tell you what. There are many embarrassing ways one could exit this life — on the toilet, in a dryer, having sex with Spencer Pratt — but when you’re surrounded by all these athletes, the last thing you want to do is slip on a discarded mountain of gatorade cups and impale yourself on the stick holding up a sign that says, “SHOW ME YOUR NIP GUARDS.”

Other signs along the route:

THE SUBWAY IS RIGHT THERE.

BEER MISSES YOU, TOO.

The four of us ran side-by-side, each of us looking around for the others as we passed through the stations. When we found each other we’d make sure everyone was ready and then head off running again. Each time one of us saw someone we knew along the route, the whole group would slow down so we could have our moments. Each and every time. We even agreed to stop only once, at mile 13, to use the porta potties. I was certain that within the next half mile all our menstrual cycles would be synced.

I can’t stress enough how having this group dynamic helped with the pain, helped with moving forward. Because at 13.3 miles I realized I was headed into no man’s land. I had never run that far before, and we were only halfway done.

Heather, that’s why they call it a half marathon.

Head, I know this, but when you’re actually running a marathon you don’t think, oh, I just ran a half marathon. You think yay! I’m halfway there, IDIOT.

Heather, you’re talking to yourself in the third person AND calling yourself names.

As we ran that 13th mile I’d turn to Erin every other minute and say, “Look! This is the farthest I’ve ever run!” And then finally at mile 14 she was like, dude, if you say that one more— but I interrupted her because I had just run the farthest I had ever run.

Right at that moment I thought someone had shot me in the left knee with an arrow, a flaming arrow filled with poison that immediately unfurled in liquid black waves up my left thigh and down into my calf. So not only was it the farthest I had ever run, it was the first time any part of the left side of my body had ever hurt while running. I am checking off my life list faster than you can read it, BITCHEZ.