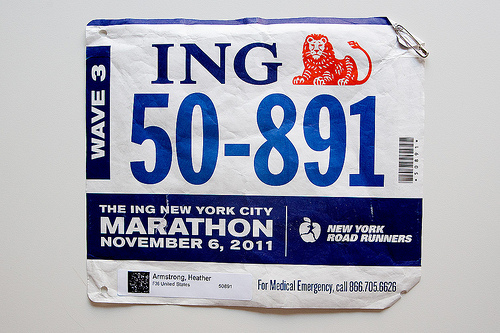 (You can find part one here and part two here.) I considered myself pretty lucky that I made it 14 miles without any of my injuries taking me out of the race. RELATED: I got a letter from my insurance provider telling me that they are pretty certain that all the injuries I’ve incurred in the last couple of months can be blamed on someone or something other than myself, because, come on. No one is this clumsy:

Has Eminem ever worked LUMBOSACRAL into a song? DIDN’T THINK SO. A med student could totally school his ass.

The insurance company is like, come on, Armstrong. You slipped in a retail store, didn’t you? Maybe someone strapped you to the back of their motorcycle and ran it into a billboard. YOU BOUGHT A DEFECTIVE POGO STICK. Out with it already.

Out with what? I had two months to train for a marathon. You don’t think I was tempted to walk back into that doctor’s office and say, dude, you’re not going to believe this, but Fonzie kidnapped me, tied me to the back of his motorcycle with a rope, and we jumped off the Hollywood sign into a billboard of Kim Kardashian’s face. That’s why my ankle hurts.

14 miles without any aches or pains, and then BOOM. My left knee filtered the impact of every step into millions of barking dogs, hungry German Shepherds who gripped the flesh on the side of my leg with their teeth. And we were just about to begin the unending climb up the Queensboro Bridge into Manhattan. LET ME TAKE JUST A MOMENT, PLEASE.

If you came here to make fun of my ALL CAPS USAGE, well then, aren’t you having a fucking great day.

I once wrote about how I tried to avoid steep hills during my training runs, and people lost their damn minds. Didn’t I know that the NYC Marathon is the hilliest of all the major marathons? The bridges, Heather, THE BRIDGES! Lions and tigers and BRIDGES! OH MY!

Give me a break. You call that a hill? Utah regularly has bouts of diarrhea that are steeper than those bridges. I was talking about actual HILLS, people, not a homemade ramp your four-year-old tries to jump with his big wheel.

Halfway up the Queensboro Bridge I almost stopped, climbed up onto the middle traffic barricade and yelled PUSSIES. THE LOT OF YOU.

But I was in too much pain. My knee was barking, and then in very quick succession every injury I’ve ever had started to manifest its presence: the toe I broke when I was pregnant with Marlo, the tailbone I cracked snowboarding, the neck muscles I pulled during a workout, my hip, my ankle, my groin. Every account I’ve read about this marathon says that the roar you hear when entering Manhattan off of the Queensboro bridge is louder than any concert or rally you’ve ever been to. But all I heard was eerie silence, and I don’t know if it was because people were just standing there boycotting me because I had thought about calling their fellow New Yorkers pussies (I’m lucky to be alive, really), or because all I could hear was my brain going OW, OW, OW, OW, STOP, STOP, STOP, STOP.

That was mile 16. Only 10 more to go. That’s only one, two, three, wait. I’m getting really tired counting that high. Maybe that’s why the thousands of bodies ahead of me on First Avenue looked like they were running back toward me. Was that an illusion? Was I really running in the wrong direction? Suddenly someone read the name on my shirt and yelled, “GO, HEATHER!” And I swear to God I yelled back, “YOU KNOW ME?! HOW DO I KNOW YOU? Small world!”

I struggled to keep my body moving forward for the next two miles, and the only way I remained upright was the anticipation of seeing Jon. We had agreed that he’d meet me somewhere around 90th street, but the closer our group got to that spot, the thicker the crowds grew. I was the only one in our group who hadn’t seen Their Person yet, and I was starting to panic when suddenly Erin yanked me on the elbow, and pointed to the other side of the street. I looked over by the 91st street sign to see Kramer running and screaming my name.

Thank god for all those years I wasted playing Frogger, because HOO. The running field never thinned out. We were packed body to body, and I risked getting knocked over by a pack of barefoot Europeans just so I could say hi to my husband. What follows is his account:

I came running over, a giant grin on my face. He asked how it was going, and I answered, “This is kind of rough. One of the hardest things I’ve ever done. But it’s so good to see you!”

ARE YOU FUCKING KIDDING ME? THIS IS THE WORSE THAN DATING THAT GUY WHO LIKED HAVING KITCHEN UTENSILS STUCK UP HIS ASS.

I’m fine! Wow. Made it another mile and I’m not dead. Hooray for not dead!

SHUT UP. I’D RATHER BE DEAD.

Oooh! A water station! A palace to quench my thirst!

NEXT PERSON WHO YELLS, “KEEP GOING!” GETS THIS GATORADE CUP STRAIGHT IN THE NUTS.

I appreciated the crowds along the last few miles of the race, but wait. No I didn’t. That’s a total lie. I desperately wished I had a gun so I could just stand there and randomly shoot at all those loud, cheery strangers. The noise was so obnoxious, especially since I was trying to concentrate on putting one foot forward, and what? What was that you just yelled at me? “Don’t quit now?” LISTEN, YOU SCROTAL FUNGUS. HOW ABOUT YOU— and Erin would pull me away so that I didn’t start a bar fight.

Erin hasn’t ever experienced labor pains, so when we passed the mile 23 marker I told her that what we were feeling was the baby’s head crowning, a very large, hairy head. And then at mile 24 I told her that the head was so big that it had torn the perineum. At least we hadn’t pooped on the table!

Hey, you. You 19-yr-old frat boy. You read a mommyblog. You think I’m going to make Star Wars comparisons? Wipe the puke off of your chin and finish this post.

That’s when Erin turned to me, her hair and face mapped with sweat, and said, “Let’s do this.”

Let’s do what? Smoke a joint? Yes, please.

Stop, walk over and steal someone’s beer? Follow me.

But she meant none of those things. In fact, she meant the one thing in the world that I most certainly did not want to do: SPRINT.

I don’t have any material data to prove this, and as far as I know I’m not a paranoid schizophrenic, yet, but I think the organizers of the marathon wanted to screw with me. Me specifically. Those last 2.2 miles were at least 10.2 miles. THEY WOULD NOT END. I was moving my legs as fast as I could against the barrage of messages in my brain demanding that I stop this right now, but what could I do? It was time to push. No going back. Also, HEATHER. This is New York. You’re familiar with James Gandolfini’s work. You might want to check that urge to yell SHUT UP to everyone who came out on a Sunday to cheer for you.

I sprinted and sprinted and sprinted. I could type that word a million times and it would still not convey just how endless that last mile was. It stretched and expanded, twisting and hiding around trees and spectators. Excruciating pain erupted in violent, volcanic bursts every time I flexed a muscle. Pain, more pain, even more pain. And then… and then… IT’S A GIRL!

The jubilation would happen much later, but when I finished the race I started to moan involuntarily. Awful sounds spewed from my face. I thought I had crossed the finish line as poised as I could in the condition I was in, but when the organizers sent me the actual video footage you see me stop suddenly, look around like a lost baby and stumble around drunkenly. No one will ever get their hands on that video SO HELP ME GOD.

Would I ever do it again? Absolutely, but only if I had the time to train properly. Many of you asked me what was more painful: a marathon or an unmedicated birth. Both are agonizing psychological journeys, but if I want to be honest I’d have to say… the marathon. That medal is very cute, but it doesn’t have a dimple.